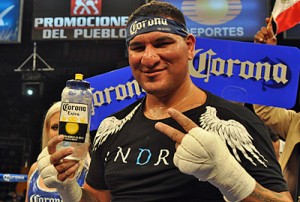 fight against journeyman, Raphael Butler (35-12, 28 KOs) Saturday night, dropping his opponent twice in the first round, once in the second, and one final time in the third before the fight was waved off by the referee. This is Arreola’s sixth straight win since his 2010 loss to Tomasz Adamek.

Centro de Cancun, Cancun, Quintana Roo, Mexico– On the James Kirkland-Alfredo Angulo undercard, 2008 Olympic Bronze Medalist, Deontay Wilder (19-0, 19 KOs) walked through a game, but overmatched Daniel Cota (17-4-1, 10 KOs), dropping the Mexican national once in the first round and once in the third en route to a TKO 3 victory.

Also, younger brother of Erik Morales, Ivan Morales (14-0, 9 KOs) stopped Rene Trujillo (7-22-2, 4 KOs) with a body shot in the second round of their scheduled six.

Seminole Hard Rock Hotel and Casino, Hollywood, Florida– Guillermo Jones (38-3-2, 30 KOs) made the second defense of his WBA cruiserweight title by stopping overmatched journeyman, Michael Marrone (20-4, 15 KOs) in the sixth round of their scheduled twelve.

For a full report on the Bute-Johnson card in Quebec, click HERE