This Saturday night, HBO showcases the boxing Trilogy between the 32 year old Manny Pacquiao and 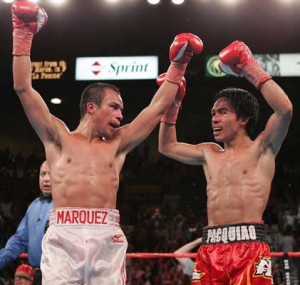 38-year-old Juan Manuel Marquez for the WBO welterweight championship belt. This event is set up to be an electrifying show of bravado and machismo between two fighters who are unstoppable forces when they step into the squared ring. This sensational all out action has high expectations and hopes to breathe new life into the slowly dying sport of boxing.

In the very first round of their initial fight on May 2004, Pacquiao dropped Marquez 3 times, but miraculously, Marquez was able to get up and beat the count every time, surviving until the end of the round.

Marquez eventually regained his composure and made a tremendous effort and won most of the remaining 11 rounds. Many felt that even though Marquez was knocked down 3 times and on the edge of defeat in the first round, he finished off stronger and scored more points to deserve the victory. The judges’ total scored it a draw, robbing Marquez of a well-deserved comeback victory.

Then in March of 2008, after a hard fought 12 round war and with majority of the rounds also thought to be won by Juan Manuel Marquez, judge Duane Ford voted 115-112, judge Jerry Roth voted 112-115 and judge Tom Miller voted 114-113, giving Manny Pacquiao a split decision victory over the more deserving and dejected Marquez.

The past aside, it’s now or never time for Marquez, and also the last opportunity for him to shine under the bright lights of the Las Vegas MGM and finally claim his right to the welterweight throne. Although, Pacquiao who is the best in the division, will most likely have a say in the matter and will enter the ring with canons blasting after Marquez, in order to quiet the naysayers and critics who believe that Marquez was robbed in their first two fights.

My hope is that my fellow Mexican countryman and all-time favorite boxer, Juan Manuel Marquez, comes out victorious, for Manny Pacquiao has annihilated, defeated and retired many great legendary Mexican fighters and at this stage of the game, with Floyd Mayweather hiding in the shadows, it seems like Marquez is the only one who can dethrone the seemingly invincible Pacquiao.