Cohen Stadium, El Paso, Texas– In a complete and total mismatch on Showtime’s 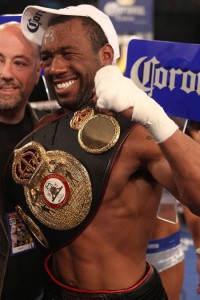 Trout’s nickname is “No Doubt” and LoPorto’s should’ve been “No Hope” because the crude challenger, who somehow was ranked #14 by the WBA, had absolutely no chance of winning whatsoever at any point of the contest.

With no power, no skill, and no defense, LoPorto was battered at will by a Trout who may have just as well been hitting a heavy bag.

After a first round knockdown from a Trout right hand, the only intrigue in the bout was when it would finally be stopped and the only cause for concern was whether LoPorto’s flailing style would provoke a cut from a headbutt.

Mercifully, the one-sided farce was waved off by the ref at 2:32 of the sixth round.

On the televised undercard, Brazilian-American prospect, Miachael Oliveira (16-0, 13 KOs) beat veteran club fighter, Xavier Toliver (23-8, 15 KOs) via disqualification in the final round of their eight round middleweight contest.

Despite a quick start by Toliver in the first, Oliveira took complete control of the contest by the end of the round and dominated the contest right up until the the referee’s decision to end the bout after a hit on a break by Toliver. The result was originally announced as a TKO, but was later changed to a DQ.

Toliver would also have a point deducted from him in the fifth round for repeated headbutts.