MGM Grand, Las Vegas, Nevada– In the third installment of a closely-contested trilogy 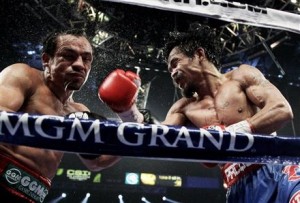 Pacquiao, who fought an uncharacteristically cautious contest, attacked in occasional flurries while a calm, collected Marquez looked to counter, well-conscious of defending against the Filipino’s frenetic speed.

While the bout lacked the sustained exchanges of their first two encounters, the battle highlighted two warriors who were smarter, better fighters overall than in their previous contests.

It became clear by the middle rounds that the judging would be highly subjective and open to dispute as the back and forth momentum shifts could’ve been ruled in favor of either fighter.

At the end of the bout, though, it was the defending champion and pop culture icon who got the benefit of the doubt from two judges by scores of 115-113 and 116-112, with the third judging marking a 114-114 draw. The Boxing Tribune scored the fight 115-113 in favor of Marquez.

In the post-fight interview, Pacquiao affirmed his victory and welcomed the idea of a mega-fight showdown with Floyd Mayweather Jr. in May amid a cascade of boos and jeers from the fans at the MGM Grand, who were still protesting the decision.

Marquez, who refused to give an in-ring interview, later spoke to HBO’s Max Kellerman in his dressing room, claiming that he had been robbed once again and by a greater margin than their last bout.

In the chief support to the main event, Timothy Bradley (28-0, 12 KOs) stopped a badly faded Joel Casamayor (38-6-1, 22 KOs) in the eighth round of their scheduled twelve.

Hardly the scintillating primer for a Pacquiao fight that Bradley wanted, the talentd junior welterweight plugged ahead, winning each round and scoring knockdowns in the fourth, fifth, and eighth rounds en route to an eight round corner stoppage by Casamayor’s chief second, Miguel Diaz.

Casamayor, who was never competitive at any point of the contest, also had a point deducted from him in the fourth for excessive holding.

In a thrilling, come from behind victory, Mike Alvarado (32-0, 23 KOs) stopped Breidis Prescott (24-4, 19 KOs) in the tenth and final round of an entertaining junior welterweight battle.

Despite likely dropping the first five rounds and suffering serious cuts over the left eye and inside the mouth, the Denver native, Alvarado, kept coming forward, working himself back into the contest and slowly grinding down a motivated and frequently effective Prescott.

Colombia’s Prescott would taste the canvas for the first time in his career in a one-sided tenth round and could never recovered in the face of a motivated, charged-up Alvarado. With Prescott on weak legs and unable to tie up, referee Jay Nady had seen enough and opted to wave off the contest at the 1:53 mark.

The Mexican, Burgos, came on strong and swept the early rounds, only to fade a bit in the middle rounds, allowing Puerto Rico’s Cruz to get back into the fight. Overall, though, it was Burgos who scored more often and controlled the pace of the contest.