Brace yourself. I’m about to defend Jose Sulaiman and the WBC. Please don fireproof clothing.

See, you can jabber all you want about how the Mexico City-based sanctioning body 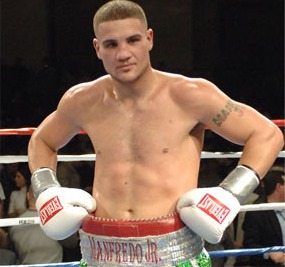 manipulates the rankings to benefit Mexican fighters. Sulaiman’s guilty as charged on that front, which is why Saul Alvarez holds the WBC belt at 154 and Julio Cesar Chavez Jr. (43-0-1, 30 KOs) is a titleholder at middleweight. Sergio Martinez, the consensus champion at 160 pounds, holds no “regular” title at that weight. It’s a wonder that the WBC hasn’t figured a way to make Chris Arreola its heavyweight belt holder and Wladimir Klitschko the Super Duper Diamond Champion Emeritus With Oak Leaves titlist. All of the above is a perfectly valid criticism of the legitimacy of Sulaiman’s little cabal.

Except for one problem—Saul Alvarez has beaten everyone put in front of him (save a single draw early in his career) and so, for now, has Chavez (again, with a single draw). Sure, neither guy has fought anyone of any real note, but if either guy were a tomato can, we’d be having this discussion about Sebastian Zbik or Billy Lyell and I suspect there wouldn’t be nearly as much whining about it from the boxing media.

See, the “Sulaiman is pushing the Mexican fighters” angle is too good to pass up, and the fact that there’s more than a grain of truth to it only fuels the passion, or should I say the froth, that people have to make comments that frankly border on racism. There’s a palpable desire in some circles to see Chavez, the son of a legend, “get exposed” this Saturday against Peter Manfredo Jr. (37-6, 20 KOs) Manfredo is an affable chap with a tough-as-nails father for a trainer and a fan-friendly style. He was on The Contender reality series, which means…well, nothing, but everyone always talks about how such-and-such a fighter “was on The Contender reality series”. Grand scheme it means the journeymen crowned him as the Rat King or something.

Peter Manfredo Jr. is a white American fighter who has been on network television, come through the ranks on ESPN, and now gets to fulfill that American underdog story, and in his way is the big bad Mexican and his Mafia belt aided and abetted by that long-lost Corleone brother in the Federal District. Chavez may as well be Ivan Drago in a sombrero, and since the fight is in Houston, the food will no doubt be better than what the press row would’ve dined on in Rocky IV.

Bottom line, what we’ve got here is a win-win for the sport. If Peter Manfredo Jr. wrests the WBC middleweight championship away from Julio Cesar Chavez Jr., it will be a stinging blow to Jose Sulaiman’s machinations, a win for common decency in the sport of boxing, a marketable white American champion to show to white American boxing fans, a chance for Manfredo to be offered up as a sacrificial lamb for Sergio Martinez, and everyone goes home happy.

But if Chavez wins this fight, that’s a win as well. Every time the son of the Hall of Famer wins a fight, every time he defends even a sham title, it adds fuel to the fire of “what do you want? If he were that much of a chump, then [Duddy/Lyell/Zbik/Manfredo] would’ve knocked his ass out!” Nobody’s saying that Julio Cesar Chavez Jr. is Carlos Monzon or a young Bernard Hopkins in there.

What’s more, the more Chavez gets people to hate him, the more the “Sulaiman’s manipulating the division” rhetoric turns the Mexican fighter into a villain, the more we will ourselves to believe that someone’s got to bring this guy down for the good of the sport and whatever other moralistic damn fool posturing you care to throw into the discussion like the world’s worst soup pot, the more hype gets created for when Chavez takes that step up in class and takes on a real opponent like a Sergio Martinez or a Felix Sturm or even a Mexican superfight with Marco Antonio Rubio (a win-win for the WBC and the fight fan alike). Vince McMahon himself couldn’t orchestrate a better heel turn for purposes of the storyline.

Whatever. I’m white, I’m American, I like Peter Manfredo Jr. as much as I like any other journeyman getting a title shot, but at the end of the day I want to see Julio Cesar Chavez Jr. continue to write what is turning into one of the better stories in boxing. Every time he wins, and every time someone throws a conniption fit over the belt around his waist, we get that much closer to seeing some really good scraps down the road, and the sport is better off for it—I just hope it’s a knockout one way or the other so that nobody gets to carry on and piss and moan about the judging. Boxing got enough of that last week.