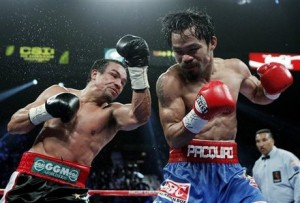 bad taste in many mouths, but as an event, it was a major success, setting a record in Mexican TV history and becoming the country’s most viewed boxing event ever.

The broadcast, carried via tape delay on Azteca 7, brought in a rating of 31, easily surpassing the previous ratings record of 27, generated by 2010’s Pacquiao-Antonio Margarito bout. Third on the all-time list is March’s 23 rating for the Saul Alvarez-Matthew Hatton contest.

Translated into raw numbers, Pacquiao-Marquez III had an average live audience of 37.2 million viewers, roughly a third of Mexico’s total population (113.4 million). By comparison, the only sporting event in the U.S. with similar numbers is the Super Bowl, which also generally attracts about a third of the country’s total population.