With over 18,000 tickets already sold for the Antonio Margarito-Miguel Cotto rematch at Madison Square 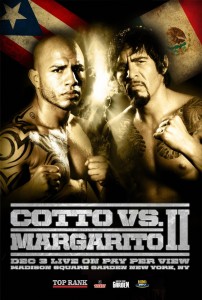 Garden on December 3 and Cotto proclaiming that he would not fight under any other state commission’s authority, Top Rank avoided a real mess when the New York State Athletic Commission (NYSAC) announced that they would grant Margarito a license to fight in their state.

The commission, which was concerned over the surgically repaired right eye of Margarito, was unanimous in their decision to license the Mexican fighter based on the testimony of several renowned eye specialists.

Margarito’s injuries, suffered at the hands of Manny Pacquiao in their November, 2010 bout, included a broken right orbital bone and a cataract in the right eye resulting from the one-sided beating he sustained.

In the July 2008 first Margarito-Cotto bout, Margarito forced Cotto to submit in the eleventh round of a bout that saw the Puerto Rican star take a brutal beating. In Margarito’s very next fight, however, he was discovered to have illegally doctored knuckled pads before entering the ring against Shane Mosley at The Staples Center in Los Angeles. Margarito would go on to lose to Mosley via ninth round stoppage and then, two months later, have his license revoked by the California State Athletic Commission (CSAC) for the illegal wraps. Despite never getting his license back in California, Margarito was able to fight in Texas and, now, has received the green light for a New York appearance.