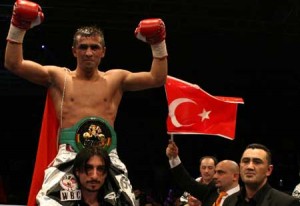 16KOs) will meet in the ring for a rematch.  The first bout went the distance as Aydin walked away with a split decision win over Ion in June 2010.

Aydin will be fighting in front of his home crowd and comes into the bout knowing that he sent Ion to the canvas in the first round of their last fight.  Ranked 9th in the world among welterweights, Aydin is hoping to put to rest any doubt that he belongs in the top ten.  Since his match with Ion, Aydin has won two bouts by KO against fighters who since have stacked up consecutive losses.

Hailing from Romania, southpaw fighter Ion comes into this bout with a chip on his shoulder.  Although he lost the first fight by split decision, the two judges who scored against him did so by just one point, 114-113.  The third judged scored the bout in favor of Ion 116-111.  Additionally, opinion holds that he came back strong from what some consider a flash knockdown in the first round and got stronger as the fight continued.  Since his fight with Aydin, Ion has logged three consecutive wins, none of which went the distance.

The fight will take place in Trabzon, Turkey.

Check out their first fight at the following links: