One is an affable red-headed farm boy from Juanacatlán, Jalisco, the other is second generation boxing 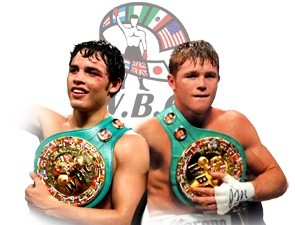 royalty with a dismissive smirk and a healthy ego.

Both hold WBC world title belts that they never really earned and, for better or worse, both are forever tied together in the minds of fight fans.

While Julio Cesar Chavez Jr. was being built up to be the new millennium’s Gran Campeon Mexicano with soft touches on high-profile undercards and niche pay-per-views, Saul “Canelo” Alvarez jumped in and knocked the boy king off his well-paved road to greatness.

Now, Alvarez is the child prodigy working his way into the hearts of the Mexican fight public and Chavez Jr., who was raised under the assumption that he was destined for (and deserving of) greatness and adulation, is #2.

Looking at both fighters, it’s no mystery why Chavez, despite the famous name and loads of hype, has been slow to capture the Aztec Nation’s hearts and boxing souls.

From early on in his pro career, the young Chavez acted supremely entitled to the love of the Mexican public and treated critics with a dismissive wave of the hand. He was the best, beating the best, looking to fight the best, and then, as fabricated world champion, had proven his point. He was the kid who was prominent in the Mexican media, calling out fighters like Miguel Cotto and Floyd Mayweather while plodding through bouts with the likes of Grover Wiley and Tobia Giuseppe Loriga. Throw in a couple of questionable decisions against Carlos Molina and Matt Vanda that had enraged Mexican fans chucking cups of beer and balled-up popcorn bags into the ring and the “Son of the Legend” was already a fading pretender to the throne before El Canelo cut in line.

Alvarez was everything Mexican fight fans expect from their prospects– humble, quiet, and reverent to the icons of the past. He was also a hard-working student of the game who still lived among the people and was truly, “One of them.”

Of course, there was plenty of marketing involved in getting him this image and, in recent weeks, we’ve seen some reality injected into that “Aw, Shucks” visage via an alleged Canelo beat-down of 108 lb. champ, Ulises Solis, in a jealousy-fueled street ambush. But, still, Alvarez was smart enough to be quiet while his image was being constructed and compelling enough in the ring to keep things going.

The 21-year-old freckled redhead went from local curiosity to regional attraction before hitting it big against the usual club-dwelling, part-time Footlocker-working suspects. But, while Chavez Jr. was knocking out cab drivers on high-profile undercards in Las Vegas, Alvarez was working the state fairs and bull rings of Mexico’s equivalent to the American Mid-West circuit.

Built the old school way, the buzz about the redheaded kid became so great that, by the time he beat Gabriel Martinez for his first minor governing body belt in 2008 (the WBA Fedecentro welterweight title, whatever that is), Alvarez was already a star.

And while Chavez Jr. was being showered with beer by disgruntled fans following the Matt Vanda bout in Hermosillo, Alvarez was basking in the glow of his national TV debut and being exalted as the next big thing.

El Canelo had become what Chavez Jr. was supposed to be and Chavez Jr., despite what he was lead to believe, would no longer be the sole heir to the Mexican boxing legacy.

From that point on, both would be forever connected, each fighter measured against the other’s accomplishments for as long as both were still part of the sport’s collective unconscious.

Cintron, despite a reputation as a head case and serial underachiever, is the best and most complete fighter either Alvarez or Chavez Jr. has ever faced. An impressive win over Cintron will go a long way towards pushing Alvarez ahead in the virtual foot race between the two prospect-champions, even though Jr., in his last two fights, has displayed a level of skill above what Alvarez has shown so far.

Based on ability, alone, Chavez is the flashier of the two and has the look of a natural born athlete. Alvarez looks like an apprentice bricklayer and often fights like one– confident, calculated, and almost frustratingly steadfast. It’s in Chavez Jr.’s character to put on a show, it’s Alvarez’s nature to get the win. The former will grab America’s attention, the latter will win the hearts of Mexican fight fans.

Don’t count on the two ever meeting in the ring to settle their differences and establish a true pecking order. Aside from the usual Top Rank-Golden Boy drama, it’s in nobody’s best interest to push this fight with so much treadable ground ahead of both fighters. Also, Alvarez’s body frame suggests a max-out at middleweight while Chavez, currently a middleweight, is a light heavyweight waiting to happen. By the time things fall in place for a showdown, there may be two or more divisions separating them.

So, fans will likely have to settle for a rivalry comprised of sarcastic digs in the media and a side by side comparison of resumes and career choices.

This Saturday, at the Monumental Plaza de Toros in Mexico City, Saul Alvarez will be defending his WBC jr. middleweight title against Kermit Cintron, but he will also be up against the ghost of Julio Cesar Chavez Jr. What “Canelo” does this weekend will give us a better idea of who’s really winning the rivalry between Mexico’s two Boy Kings.