When Kermit Cintron (33-4-1, 28 KOs) steps into the ring at Monumental Plaza de Toros in Mexico City, 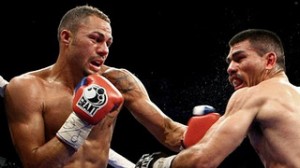 Mexico on Saturday night, he will be the clear B-side to burgeoning star, Saul “El Canelo” Alvarez (38-0-1, 28 KOs), the current WBC jr, middleweight titlist making the third defense of the title he won in March of this year. Cintron is yet again placed behind the 8-ball, with the chips stacked against him as he goes to his opponent’s backyard in front of what will surely be a hostile crowd. He isn’t expected to win, despite what you may hear from Golden Boy Promotions.

Cintron has been here before. This isn’t his first rodeo.

For a guy that began boxing at only 19 years of age, Cintron has gotten far on talent alone. With his height, long reach, and punching power, a few brave souls compared Cintron to Thomas Hearns early on. Cintron, only 25 and with six years of boxing experience under his belt, earned his first title shot against Antonio Margarito in 2005. Undefeated and winning 22 of his first 24 by way of knockout, Cintron posed a legitimate threat to the persistent Margarito. Cintron would suffer the first defeat of his career to Margarito, a fifth round technical knockout loss. In the 6-and-a-half years since that loss, Citnron has fought only 10 times, winning a vacant welterweight title, and being part of two of the more controversial decisions in recent years along the way.

Cintron’s title-winning effort came in October of 2006 against the unheralded Mark Suarez.  He won the vacant IBF strap via fifth-round TKO and defended his title twice before getting a rematch with Margarito, a fight he would again lose in convincing fashion. The man who showed flashes of brilliance in dispatching of fringe contenders Walter Matthysse and Jesse Feliciano, was reduced to a writhing heap on the canvas from a perfectly-placed liver shot by Margarito.

After a comeback win over Lovemore N’Dou in November of 2008, only seven months after his second knockout loss to Antonio Margarito, Cintron was set up to face Sergio Martinez, the eventual WBC jr. middleweight champion. After being knocked down and counted out in the seventh round, Cintron argued that the knockdown was a result of a headbutt. Referee Frank Santore reversed his decision and the bout continued at the behest of Martinez and his corner. Martinez was deducted a point for hitting behind the head of Cintron in the ninth round, effectively leveling the scores for two of the three ringside judges and rendering the bout a controversial majority draw.

Now looked upon as damaged goods and an opponent of merely name value, Cintron was set to face jr. middleweight contender, Alfredo Angulo in his next bout. Cintron used his reach to stay outside of Angulo’s comfort zone and sneak away with a comfortable unanimous decision victory over the feared “Perro” Angulo.

What should have been a rewarding victory didn’t take Cintron to the next step towards another title shot. He took on little-known Juliano Ramos in his native Puerto Rico before being tabbed as Paul Williams’ May 2010 opponent. After four better-than-expected rounds against Williams, Cintron appeared to be ahead on the cards. At the end of a wild exchange with Williams where the two combatants’ feet became tangled, Cintron stumbled and fell through the ropes, landing on the scorers’ table before sliding into the arena floor. He spent several minutes on the ground before ringside officials declared the bout over and sent it to the judges.

As he was packed up onto a stretcher and wheeled to an ambulance, Cintron listened to scores read in favor of Paul Williams.

Cintron spent fourteen months out of action spending time with his family and re-evaluating his career. When he came back, it was announced that Cintron had signed a new deal with Top Rank promotions, and it was speculated that he would be put on the list of possible opponents for Manny Pacquiao. All he needed to do was win his comeback bout against jr. middleweight contender Carlos Molina.

Kermit “The Spoiler”, who temporarily derailed the career of the once-feared Aflredo Angulo,  had his comeback ruined by a young, hungry fighter looking to buck the “opponent” label that had saddled him since a controversial draw to Julio Cesar Chavez Jr. early in his career. After a lethargic and uninspired ten rounds, Cintron came out on the short end (and rightfully so) of three scorecards all in favor of Molina by a wide margin, 98-92.

Cintron asked for his release from Top Rank Promotions shortly after a win over Antwone Smith in August. Rather than looking at the possibility of being on boxing’s prized list of potential Manny Pacquiao opponents, Cintron will again play stepping stone for a young fighter in Alvarez, who despite being only 21-years old and without a marquee name on his resume, holds a major WBC jr. middleweight title.

Cintron is a former champion, albeit faded and marred by questions of his determination, heart, and dedication to the sport. He represents the stiffest challenge of Alvarez’s young career, but he is merely a name that Golden Boy Promotions hopes to add to the steadily-growing resume of their future super star.

Can Kermit The Spoiler once again knock a young, hype-heavy train off the tracks? Can he find the dogged determination and focus to confuse and frustrate his younger counterpart, or will Saturday night be just another loss for the former welterweight titlist-turned stepping stone?