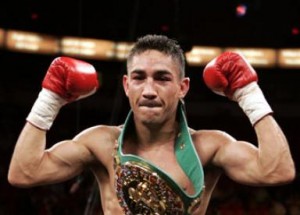 KOs) was supposed to win tonight, matched against Brazilian journeyman, Adailton De Jesus (29-7, 23 KOs), and he did the job in impressive fashion, dropping his opponent in the third round and then finishing the job in the fourth.

From the onset, the difference in class was evident as Soto spent the first two rounds feeling out his opponent and then, when he chose to step things up at the end of the third, sent De Jesus to the canvas.

Soto began the fourth intent upon ending the show and did the job, pinning his opponent against the ropes and firing a barrage of punches upstairs and downstairs that sent De Jesus back to the canvas. This time,the referee had seen enough and waved off the bout, not even bothering to issue a count.

This was Soto’s second straight fight at the junior welterweight limit.