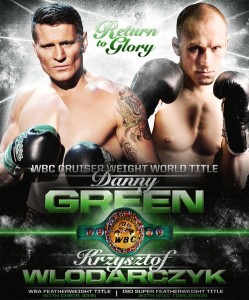 territory this Wednesday against Australia’s homegrown hero, Danny Green (31-4, 27 KOs) at Challenge Stadium in Mt Claremont, Australia. The defending champ, nicknamed “El Diablo,” is also bringing credibility as a top cruiserweight and hence, a chance for Green to redeem himself in the eyes of the boxing community after losing his July bout with Antonio Tarver via ninth round corner stoppage.

Green, despite being a major draw in his home country and holding a fringe title two years prior to the Tarver loss, has yet to fight in a legitimate world title bout as a cruiserweight and, overall, is only 1-2 in world title fights– beating Stipe Drews for the WBA light heavyweight title in 2007, but before that, dropping a majority decision and a DQ to Markus Beyer for the WBC super middleweight title in 2005 and 2003, respectively.

Over the course of a ten year career, “Green Machine” has developed a reputation as a solid regional fighter unable to step up to the world class level. A win over Wlodarczyk would go a long way in validating Green’s status as a top cruiserweight and add some more pay days to the 38-year-old fighter’s career.

Wlodarczyk, who is 4-1-1 in world title bouts, was also a former IBF cruiserweight champ and is best known for going 1-1 in two bouts with American, Steve Cunningham. The current WBC titlist has also scored victories over Imamu Mayfield, Francisco Palacios and Giacobbe Fragomeni.

On the undercard, Indonesia’s WBA featherweight champ, Chris John (45-0-2, 22 KOs) looks to make the fifteenth defense of his title against no-hoper, Stanyslav Merdov (32-7, 24 KOs), who is only fighting outside of his native Ukraine for the fourth time in his nine year career.