July 26, 2008, Antonio Margarito had just applied a pressure filled attack over eleven rounds weathering a boxing clinic, to force Miguel Cotto into submission to obtain the big stage victory he had sought for 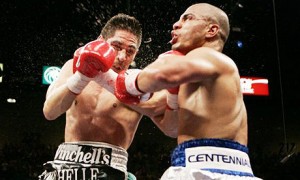 Jim Lampley: Antonio Margarito has the victory he has been waiting for all his life.

Max Kellerman: That, was a modern boxing classic.

Jim Lampley: An epic fight, with an epic conclusion.

It should have ended with that.  A great fight between two hungry rising stars continuing the Puerto Rico-Mexico rivalry.  A momentum swinging boxer’s brawl that had a dramatic ending.  For six months after the fight it stayed that way.  Then everything changed when Shane Mosley’s trainer, Nazim Richardson noticed a strange pad within Margarito’s hand wraps.  Richardson ordered the wraps be redone and the pad was confiscated by the California boxing commission.

The rest is well known history.  Margarito went on to be destroyed by Mosley and his knuckle pads went to a lab, where it was found that they had substances that make plaster of paris.  But while the events of the night in California are known, a cloud of suspicion hangs over the Cotto-Margarito fight.  What should have gone down as a classic fight is heavily tainted, as everyone speculates if Margarito had the illegal knuckle pads against Cotto and how much those pads played a role in his taking down the Puerto Rican star.

The first go round between these two was the fight that more than any other inspired me to start using my love of writing in the field of the sweet science.  I had so much to say afterwards, I began writing a blog on my gym website and have not looked back.  Except I often look back to that fight with so many questions.

I once considered it a great comeback from Margarito, to overcome the more talented boxer and prevail with pure heart and determination along with an iron chin.  I wrote at the time that I was amazed by Margarito’s ability to take so much punishment and still move forward with heavy hands.  I described him as the bad terminator in the second installment of the classic movies as he walked forward being shot by Cotto but healing instantly and hitting back harder.  Now I question if it was heavy hands or plaster.

I remember after the fight seeing Cotto’s absurdly bruised and bloodied face and feeling bad for him, which is something a boxing fan should not admit amongst the machismo fight crowd.  But the punishment was beyond belief, even in this sport.  Now I ask, what was the real cause of Cotto’s re-arranged facial features.

Why did the Boricua bomber, who was known for backing up all his opponents forcing them into submission, have the tables turned.  Did he finally meet his match or was he illegally destroyed by illegal knuckle pads.

My colleague at the Boxing Tribune this week will make the argument that Margarito is capable of taking Cotto down with or without loaded wraps with his non-stop pressure and iron chin.  He very well might be right.  Ignored in the first fight after the scandal was how Margarito took everything Cotto had, was not hurt or phased, and just kept coming.  The counter argument though is if Cotto’s body was being hit with legal gloves and not plaster he may have had the energy and stamina to dominate the second half of the fight the way he dominated the first half, never succumbing to Margarito’s pressure.

So now they will do it again.  They will enter the ring for a rematch, for revenge, and to settle what has become a bitter grudge on both sides.  Cotto has made it clear leading up to the fight he is convinced Margarito cheated him in the worst way that can be done in the sport of boxing.  Margarito steadfastly denies doing anything illegal and believes he will be vindicated by beating Cotto again.

I am not naive enough to think that the rematch will answer the questions of the first fight.  Both men have deteriorated to the point that it is possible we are not seeing anything that will answer the questions from the first bout.  They are older and have each taken a beating from Pacquiao, and both took something out of each other that night in 2008 that they will probably never again be the same fighters they were on that night.

But maybe, just maybe, something will occur within this rematch that could provide some clarity. Whether it is Cotto weathering Margarito’s blows with greater ease or Margarito walking through Cotto and getting a stoppage again, possibly the fight this Saturday will answer some questions.  Of course maybe Margarito has lost zip on his punches or Cotto simply has had his chin worn to nothing, meaning whatever the outcome Saturday it answers nothing from the first bout.