Saturday night’s HBO main event presents an interesting round of story lines.  The champion is on the road.  He comes to America from Britain bearing belts instead of bullets.  The challenger is at home.  He will defend the nation’s capital with boxing gloves. 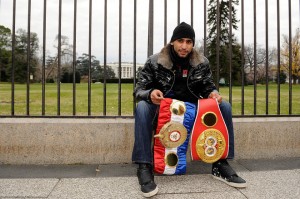 Khan, whose family emigrated from Pakistan, grew up in Bolton England.  He won a silver medal in the 2004 Olympics has been primed and groomed for stardom.  He was well on his way winning his first eighteen fights and gaining stardom in England.  Then he suffered his well-known setback, being knocked out in one round by Breidis Prescott.  The loss became a blessing in disguise as Khan then came to America to be trained by Freddie Roach and often is found in camp with superstar, Manny Pacquiao.

Since the loss, Khan has won eight straight, picked up two major title belts, and has hardly lost a round in the process.  He blew away a faded Marco Antonio Barrera, dominated veteran Kotelnyk, and blasted Paulie Malignaggi in Paulie’s backyard at Madison Square Garden.  Khan survived a replay of his chin issues when he defeated power puncher Marcos Maidana and followed that up by ripping apart Zab Judah in five one sided rounds.

Peterson’s back story is well known.  Along with his brother, Anthony, he was left without parents and homeless at a young age.  Discovered by trainer Barry Hunter who took them in, taught them to box, and became a father figure, they became successful boxers.  Peterson’s brother Anthony will be on the undercard Saturday night.

Peterson got his first crack at the big stage and a title when he took on fellow undefeated 140lb young gun Tim Bradley two years ago.  In a fight that was considered an even matchup, Peterson was dropped early in and hurt in round three.  He recovered from the knockdown and fought hard but could never get into the fight, suffering a wide unanimous decision loss, taking away his undefeated record.

Peterson bounced back with a TKO over Damian Fuller, setting him up with another big chance against Victor Ortiz on HBO.  Ortiz was still rebounding from the crushing loss to Maidana and Peterson had a chance to separate himself in the loaded Jr. Welterweight division.  But, again, Peterson tasted the canvas in round three, this time going down twice, and looked like he would suffer another loss against top competition.  But Peterson battled back, slowly gaining control of the fight and was able to walk away with a draw.  Peterson then knocked out Victor Cayo in the twelfth round earlier this year.

Now, the two different paths to this point will cross.  The irony is usually the champ has the hometown advantage.  Surely, Khan could have forced a fight in England but he has bigger dreams in mind as he looks to become a star in the States and all over the world.  So he has decided to cross the Atlantic and fight in America.  He will venture into the challenger’s backyard to show he can beat anyone, anytime, and, especially, anyplace.

Khan’s risk-taking is Peterson’s opportunity.  In boxing, a loss and a draw in two premium cable opportunities can spell disaster for your career in the big money fights. Instead, he hit the jackpot, getting an opportunity at one of the sport’s fastest rising stars.  With a win, Peterson quickly vaults up the rankings at 140lbs and gains two of the four major belts in the division.  And he gets to make his move at home.  Although the crowd is sure to have plenty of Brits invading the US Capitol to support their man (surely, still singing about the fact that there is only one Ricky Hatton), Peterson should have the majority of the crowd on his side.

Of course, Khan did this once before, taking on Malignaggi in New York City where the brash challenger was born and raised.  But Paulie was past his best days at the time while Peterson is probably maturing into his prime.  Peterson will bring speed and skills that could upset the champ.  While most of Khan’s opponents face a significant height and reach disadvantage, Peterson is only an inch shorter and has a surprising three inch reach advantage according to BoxRec.  He does not have the one punch power to attack the champ’s chin but his athletic gifts, experience gained from tough fights with Bradley and Ortiz, along with hometown support can make him a live dog.

Of course, Khan has only gotten better with each fight as well.  The lightning-fast Brit has added much better defense since working with Roach to protect his chin.  While not known as a one punch KO artist he hits with power and has become an expert at working behind his long jab to make opponents pay for any attempts at coming inside.

One man is coming to conquer America.  He is bringing speed, power, and skill with his belts.  One man is looking to stop him at the country’s front door.  He will be backed by a tough upbringing and the support of his home city.  They each stake their claim this Saturday in the nation’s capital.