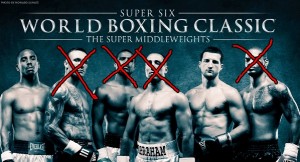 (28-1, 20 KOs) for the WBA, WBC, Ring Magazine, and popular consensus super middleweight championship of the world. Besides being the first time anything relevant has happened on the Boardwalk since someone landed on it with a hotel and paid you $2000, this fight represents the end of a long, strange trip in the sport and may not even achieve the goal it set out to accomplish, since a large contingent of Lucian Bute supporters would dispute the “undisputed champion” designation the Super Six tournament sought to create.

The tournament itself is a prime example of why anyone who suggests a “group stage” in a boxing tournament should probably be drug tested since he’s clearly chasing his LSD with absinthe. Even the most ardent boxing fan needs the assistance of Boxrec, Wikipedia, and the Cliffs Notes in order to decipher the group stage results. After the very first group stage round, Jermain Taylor did what you would expect someone who had been savagely beaten (by Arthur Abraham by 12th round KO) would do; he semi-retired in order to collect himself and come back to the sport on his own terms. Super Six became a super substitution as Allan Green stepped in to fill the shoes vacated by Taylor’s departure.

The second group stage round claimed two victims independently of the results on the league table. Mikkel Kessler, citing an eye injury sustained after defeating eventual finalist Froch, withdrew from the tournament to be replaced by Glen Johnson. Andre Dirrell, understandably dazed and in no condition for tournament fighting after Arthur Abraham hit him when he was down with a cheap shot, similarly was forced to withdraw, and the final group stage finished with a whimper as Ward got a forfeit win, Froch won an ultimately meaningless fight against Abraham since both men were assured a spot in the finals, and Glen Johnson got the benefit of being Johnny come lately against Green, who had as the net effect of his participation ironclad proof that he was not to be seen as a contender at 168 pounds.

At least the knock-out stages, though to this point ironically named since both semi-finals went the distance, went off without a hitch. Ward finally exposed Arthur Abraham once and for all by a very wide unanimous decision (120-108, 118-110, 118-111) in which Abraham threw very few punches from the seventh round onward. Carl Froch won a similarly wide decision in the eyes of most observers against Glen Johnson, the only point of controversy being an absurd majority decision (116-112, 117-111, 114-114) that did not reflect how thoroughly one-sided the fight in fact was (most press row observers had the fight ten rounds to two for the Englishman.)

So what we are left with is US vs. UK, the pride of Oakland vs. the Sheriff of Nottingham (and really, Froch can call himself “The Cobra” all he wants, he’s missing an opportunity there), and a fight that may very well turn out to be a dull, anticlimactic finish to a tournament that went on far too long for all but the most hardcore fans to follow (and indeed as mentioned, even the hardcore thank their lucky stars for the Internet when trying to talk intelligently about the series.)

The problem, as is so often the case when fighters put on less than thrilling contests, is in the fighters’ styles. Andre Ward is a tremendously technically sound fighter. For twelve rounds he carries the action, taking only necessary risks, never leaving himself exposed to a potential knockout punch. He is a boxer in the purest sense of the term. Against all but the most pressure-oriented of fighters, Ward can stay on the outside, frustrate his opponent, and gain a unanimous decision without giving the fans any “ooh” moments. He is the Klitschko brothers minus the knockout power and minus about eighty pounds. Carl Froch does not strike the observer as the kind of fighter who can get in and force Ward to fight a slugfest on the inside. Froch probably lacks the pure knockout power required to stop Ward, since against Abraham and Johnson the Nottingham native was unable to do real damage to either fighter.

What we’re left with is a situation that on paper appears to favor another fight like Ward’s wins over Abraham, Green, and (in a non-tournament fight in November of 2010) Sakio Bika. Meanwhile, we all watch and wait for the inevitable fight between the winner of this contest against Lucian Bute, who surely waits in the wings to complete his three-fight television contract with Showtime in spectacular fashion. Fireworks from Ward or Froch on Saturday would be nice, but the odds favor a fight which promises to be like the December night in New Jersey; long, cold, and dreary.

Fox Doucette covers ESPN Friday Night Fights for The Boxing Tribune. His weekly column, The Southpaw, appears on Thursdays. He thinks Ward will win a low-action decision Saturday. Fan mail, hate mail, and LSD-spiked absinthe can be sent to beatcap@gmail.com.