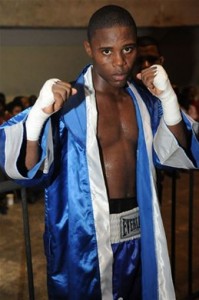 featherweight bout.  It will take place Friday, December 16th at the Mandalay Bay Resort and Casino in Las Vegas, Nevada as part of the WBC’s 49th annual convention.

An unbeaten prospect from the Dominican Republic, Fortuna has had a decorated amateur career and hopes to continue his upward progression in the sport of boxing.  His last five wins include three knockouts, one decision and most recently, he scored an RTD when his opponent did not answer the bell for the third round.

Mexican fighter Roman has won four out of his last five bouts, with three of those coming by knockout.  His most recent loss came against Jonathan Victor Barros who is ranked 10th in the world among featherweights.  Other notable opponents include Fernandez Beltran, Jr. and Eduardo Escobedo, both of whom defeated Roman.