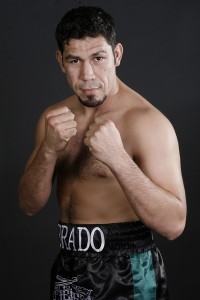 in Cozumel, Mexico.  The winner of this bout will be the mandatory challenger to IBF titleholder Lucian Bute.

Andrade has gone 3-3 in his last six bouts losing once to Aaron Pryor Jr., ranked 9th, and twice to Lucian Bute, ranked 1st in the division.  A win Saturday, would pit Andrade against Bute for the third time since 2008.

George is coming off two consecutive wins, both by way of knockout.  The untested Chicago native’s biggest fight to date was an eight round unanimous decision win over fringe contender, Osumanu Adama.