The last major fight is out of the way and now it’s time for rest, reflection, and a more dedicated focus on the beautiful señoritas in my sleepy, little Mexican town.

2011 was a wonderful time for The Boxing Tribune and it was an especially gratifying year for the Monday Rant.

Boxing’s most caustic, abrasive, and ballsy column pissed plenty of people off this year and it led to 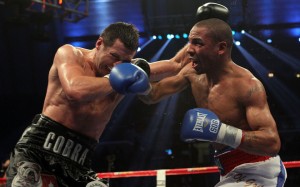 plenty of behind-the-scenes skirmishes with shady media-types and their sycophant nut-ticklers. I really wish I could share some of the emails I got– they would be real eye-openers in terms of understanding what guys like me are up against as we try to expose the douche bag world of bought and/or habitually lazy faux journalists.

But, I’m quite proud of the fact that all the right people seemed to be pissed at me– From pompous scribes who openly flaunt their conflicts of interest to the penny-click bandits to jealous, fake-angry bloggers who tried to do what we do here, but, ultimately didn’t have the balls.

The thousands of people who regularly read this weekly Rant can rest assured that, unlike some of these online phonies, I won’t be talking copious amounts of trash while secretly trying to endear myself to the same creeps I regularly bash. 2012 will see me more aggressive and more determined to expose the sleazy underbelly of the rotten boxing media as well as some of the especially nasty elements of the sport, itself.

The last Monday Rants of the year will pay homage to the holiday season with an Airing of Grievances, observing the glorious Festivus tradition, touching on some of boxing’s most pressing issues/deepest concerns with, maybe, a few touches of optimism, sunshine, and lollipops thrown in for good measure:

What do Saul Alvarez, Julio Cesar Chavez Jr., Nathan Cleverly, Adrien Broner, and Beibut Shumenov have in common? Yeah, all are twenty-something world champions, but they also hold the distinction of having somehow won a world title without ever fighting a legitimate, Top 5 fighter in their division. Also, toss in WBA junior featherweight titlist, Rico Ramos, who did beat a legitimate world champion to take the title, but only after working his way to the top with wins over nothing but journeymen and Footlocker assistant managers. I understand the logic of wanting a world title, but could we at least pretend to care about the logic and narrative of the sport? How crazy is it to say that the champ needs a few more developmental fights before facing his top challengers?

— In-Fighting, Where art thou?

Saturday night, while watching the Jorge Paez Jr.-Omar Chavez bout, I came to the horrific conclusion that those two marginal prospects were actually better in-fighters than guys like Amir Khan, Andre Berto, and any number of fighters regarded as elite level champions/top contenders. Blame the rotten amateur system, which has produced a crop of poke and run track stars or blame the absence of real, old school trainers. But, whatever the case, most of these guys are clueless when they get close enough to see the whites of their opponent’s eyes. And, no, in-fighting isn’t grappling, grasping, and rabbit punching. I guess I’m an old school guy spoiled by over eleven years in hardcore Mexican boxing gyms, but real boxing, at least if you think of boxing as an entertaining battle of body and will, is done within arm’s reach and not from five feet away.

— Judge Not Lest Ye Be Judged…or Just, Judge NOT

Also, from Saturday’s fight, there was a moment where Omar Chavez turned to the ref and insisted he warn Paez for a low blow. The ref, a local Chiapas ref who I had never seen before, quickly obliged. Really, that’s sort of 2011 in a nutshell when it comes to officiating. If there wasn’t such an incestuous relationship between the officials and those with money interest in the outcome of the fights, you could chalk it up to human error. But, it’s no coincidence when the lead promoter’s guy always seems to get the benefit of every doubt. And I don’t buy that baloney about corruption being a historical part of the game and, therefore, inseverable from boxing. There’s nothing charming or whimsical about a fighter’s efforts being shat upon or loyal fans walking away in disgust. Anyone who can so easily shrug off the shady side of the sport obviously has no respect for the fighters or for boxing. That is another Boxing Tribune resolution for 2012– dig deeper into the dark side of boxing’s judging and officiating.

Congrats to Ward, a fighter I pegged as the Super Six winner from the first announcement of the tournament. I wouldn’t say that he’s exactly the most exciting guy and I doubt this current environment of media and boxing fandom will allow him the kind of attention his abilities deserve, but it’s good to have him around. How good is Andre Ward? Well, the guy has barely lost a round at the elite level of his division and just walked right through Kessler, Froch, Green, and Abraham to win the whole World Boxing Classic. Short of Pacquiao and Mayweather, nobody else can make a claim of such elite-level dominance. Ward is 100% the real deal– No matchmaking trickery or sleight of hand. Enjoy the guy while he’s around unless, of course, you’d rather diddle yourself violently to old fight films.

(More Airing of Grievances Next Week)

You can email Paul at paulmagno@theboxingtribune.com or catch him as he abandons all hope of ever being part of the brotherhood of buffet-diving, Twitter-loving, boxing scribes. Paul is a full member of the Burger King Kids’ Club, a born iconoclast, and an ordained minister in the Universal Life Church.