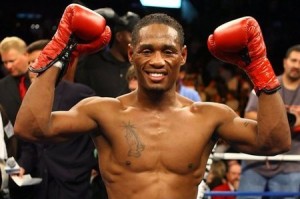 Convention Center in Oklahoma City with the minor NABF title within the WBC hierarchy at stake at junior middleweight.

Brewer has had a roller coaster of a year. He began in May with a tune-up six round decision win over lightly regarded Abel Perry before putting himself in the spotlight in June on ESPN Friday Night Fights with an Upset of the Year candidate fourth-round KO of prospect Fernando Guerrero. For a while it looked like Brewer had some fight left in him after getting brutally knocked out in January of 2010 by Erislandy Lara, which put Brewer out for 16 months from the fight game.

However, Brewer’s resurgence would come to a screeching halt in a lackluster performance on the FNF finale as Demetrius Andrade stayed on the outside, peppering the listless Oklahoma native with jabs en route to a wide unanimous decision. Brewer will be looking to get his career back on track before the final sands of the hourglass run out in this fight.

Meanwhile, the Modesto, California native Medina looks to prove that he is something other than a sacrificial lamb. His three losses have come to Vanes Martirosyan, John Duddy, and Saul Roman, and Medina has struggled with any legitimate competition throughout his career. Fighting in Brewer’s backyard, Medina has to be considered the underdog, but at age 25 he can make a statement by winning this fight, especially if he wins convincingly.

This fight, as of press time, is not scheduled to be carried on television in the United States or overseas. Those in Oklahoma wishing to see the fight should contact the events center at (866) 966-1777 for tickets.