Criminal justice buffs notwithstanding, the real issue brought up by Wednesday’s sentencing has to do with how this news affects a possible Mayweather bout with Manny Pacquiao.

Of course, this is assuming that a Mayweatther-Pacquiao bout was in the works– which it wasn’t. 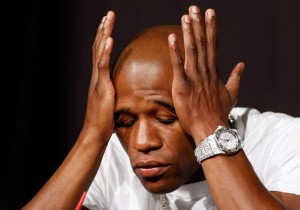 Team Mayweather has set aside a May 5th date at the MGM Grand in Las Vegas and, assuming Mayweather serves the full 90 day sentence, he’ll be a free man on April 4th. This leaves little time for real training and even less time for his usual promotional tour.

So, maybe the May 5th date is not realistic considering the circumstances. Also not realistic is the belief that this will affect a potential Mayweather-Pacquiao bout because, again, there were no plans at all to make it.

According to Manny Pacquiao promoter, Bob Arum, there have been super secret negotiations going on behind the scenes to finally make boxing’s biggest mega-fight. So secret are these negotiations that even Mayweather, one-half of the bout and head of Mayweather Promotions, was unaware they were going on.

Since issuing an informal challenge to Pacquiao for a May 5th bout late last month, the fighter has repeatedly denied that any deals are even being discussed.

Meanwhile, Arum has made several comments to members of the media regarding plans being put in motion and fruitful meetings with interested investors.

Those who’ve followed the Mayweather-Pacquiao saga since its beginnings in late 2009 are well aware of the discrepancies between Arum’s media statements and the actual truth. The 80-year-old CEO of Top Rank Promotions has repeatedly offered up distractions and misdirections whenever talks of a Mayweather bout come up. The wily promoter even once issued Mayweather a public deadline to sign-up for a Pacquiao bout, only later to admit that he never actually spoke directly to anyone from Team Mayweather about any such match-up.

Some have theorized that Arum is reluctant to make the fight and risk losing potential earnings to a fighter with whom he has no promotional deal. Up until now, it’s been easy sailing for Arum as Pacquiao has been matched in-house, against fighters the promoter has under contract. A fight with Mayweather offers the real risk that a good chunk of Pacquiao’s marketability and earning potential could fly right out the door and never be allowed to return.

Making this potential loss even less palatable to Arum is the fact that Mayweather, since leaving Top Rank promotions in a bitter, acrimonious break-up in 2006, has been persona non grata in the heart and mind of the aged promoter.

But this time, it appears that things are different. Arum’s personal Filipino ATM, Pacquiao, seems to really want Mayweather. The fighter even put together a press conference in his native Philippines to announce his desire to make the fight and, most importantly, his belief that the bout is actually being pursued by Arum.

If Arum’s goal is to avoid the mega-fight fight while simultaneously appeasing Pacquiao, the Mayweather plea bargain and subsequent jail sentence could not be a more perfect fit.

Coinciding with the Tuesday announcement of the Mayweather plea deal, Arum told Lance Pugmire of the Los Angeles Times that he is “pursuing the idea of building a 45,000 seat venue on the Las Vegas Strip” to house the fight.

Of course, now that Mayweather has been sentenced, the fight couldn’t possibly take place on the initial proposed date of May 5th. Pacquiao may be “forced” into a Spring date with recent Top Rank signee, Timothy Bradley, or a possible fourth bout with Juan Manuel Marquez.

Welcome to the Bob Arum Vortex.

In the Arum Vortex, Mayweather-Pacquiao gets closer to being made only when the fight becomes less of a possibility. At this rate, the only way the fight ever gets made is if it’s sure to never happen.

Well, that’s the world of big-time professional boxing, at least when it comes to Bob Arum and the thought of matching his cash cow against Mayweather.