Wednesday, it was announced that November’s mayoral election results in Morelia, the capital of the Mexican state of Michoacan, would be annulled and that another election would be scheduled at a later date. At the center of Wednesday’s decision to wipe the electoral slate clean is three-division world champ and future hall of fame boxer, Juan Manuel Marquez.

One day prior to the hotly-contested Michoacan elections on November 13th, Marquez fought Manny Pacquiao with the emblem of the PRI (Institutional Revolutionary Party) on the front of his trunks. The widely 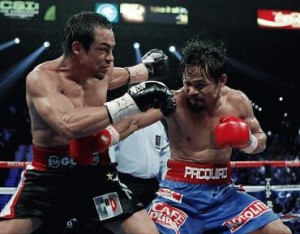 watched boxing event set ratings records on Mexican TV and, according to opposing political parties, served as a massive commercial for the party seeking to unseat the controlling National Action Party (PAN).

The elections in Michoacan were considered vital since they represented the last statewide elections prior to next year’s presidential race and Michoacan, being the home state of incumbent, Felipe Calderon, would likely set the pace for the coming year.

Critics point to the fact that November’s elections saw the PRI sweep the statewide elections in Michoacan, even in Morelia, where polls had the PAN candidate and President Calderon’s sister, Luisa Maria Calderon, well ahead just days prior to the election.

A Mexican electoral tribunal ruled that Marquez’s choice of ring wear represented a violation of the rule prohibiting partisan publicity in the final days of a campaign.

There’s no word yet on whether other cities in Michoacan will follow suit and attempt to annul November’s election results, although there’s a strong possibility that this will be the case.