Undefeated heavyweight prospect, David Rodriguez (36-0, 34 KOs) was assaulted by six men outside of a pizza parlor in Scottsdale, Arizona Friday. According to the native of El Paso, Texas, the unknown assailants attacked him and his friends without provocation and ran off before the police could arrive.

“It was crazy,” Rodriguez told the El Paso Times. “I was outside a pizza place with friends and six guys 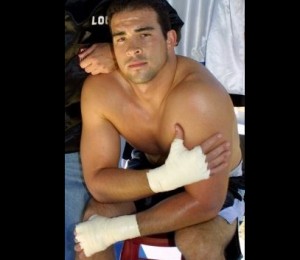 attacked me. I have over 100 stitches down my jawline. They were trying to cut my jugular. The doctors said they missed my jugular by about half an inch. I want people to know I’m OK.

“The cut is very deep, went through my jaw muscle. I have a scar from my ear to my jawbone but I’m just happy I made it out alive. The whole thing was just crazy. It was in a nice neighborhood. I’d never seen the guys before. I don’t know who they are. There was no altercation. No heads up. They just jumped me.”

Rodriguez will be bed-ridden for the next few days due to the extensive loss of blood, but the injury is not expected to sideline his career.