Not too long ago an especially pompous member of the boxing media establishment saw fit to attack me in his deadly Twitter Account of Doom. Despite this pant-load’s feeling that he is some sort of “serious” writer, the best he could do was say that I seemed to hate the sport and everyone in it.

As usual, this free buffet-diving dip-shit missed the point.

I love the sport, its athletes, and most of the fans. The only people I hate are those who abuse the 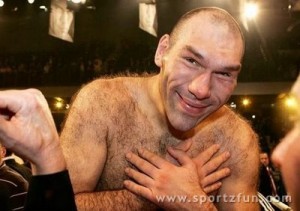 fans and the fighters. I especially hate those in the media who profess to love boxing yet take money from the same douche bags who continually insist on raping the sport. I have a zero tolerance rule for paid-off media shills and the fuck-faces who aspire to caress their shriveled sacks.

So, in this first Monday Rant of 2012, I want to get all warm and fuzzy and share with you some of the things I love about the sport that has been my passion since I was eight years old and my occupation, in some form or another, for well over a decade:

— Floyd Mayweather Jr. Say what you will about the man’s personal life, but the guy knows his sport and executes his craft like no one else. If you think Mayweather is boring, you have no right calling yourself a boxing fan.

— Fighters like Brandon Rios and James Kirkland who serve as the perfect counter for more cerebral fighters. What these fighters lack in technique, they more than make up for in pure excitement. Boxing needs all kinds of fighters.

— Manny! I’ve been branded a Manny Pacquiao “hater,” but no other fighter generates excitement like the Filipino icon. A Manny Pacquiao fight is “Must See TV” at its finest.

— Juan Manuel Marquez is the type of fighter every kid should work to emulate. He’s not a gifted athlete/thoroughbred like Mayweather or Pacquiao, but he’s right up there with the sport’s elite and his success is 100% due to hard work and a gritty dedication to learn the finer points of the sport.

— Live boxing- it’s all awesome. Don’t let jaded boxing writers influence you. Boxing, up close and personal, is the real deal. Even non-fans will come away with a real appreciation of the sport if they wind up at a live show.

— The prelims. Main events are great, but the 4-round swing bouts offer up, pound for pound, the most honest and earnest action in the sport. Have the decency to show up to the undercard for live shows and/or stay put when the 4-rounders air before the main event on ESPN or Telefuturo.

— Bernard Hopkins’ footwork, to a boxing purist, is as beautiful as a box of free doughnuts to the media en route to a trumped-up media day workout.

— Michael Katsidis. If we could just bottle Katsidis’ attitude and share it with the sport’s top 20 fighters, we’d never have to read another “boxing is dying” article from the MMA man-boys.

— Randall Bailey’s straight right hand is a joy to watch and one of the best in the sport. Mind you, I’m not counting him among the elite, but when he gets the right extension on that punch, he looks capable of beating anybody.

— Good Matchmaking! There’s an art to making a good fight. Most promoters/matchmakers don’t care to learn this ability and, as a result, the product suffers. Boxing needs to entertain, even if your ultimate goal is to get your guy to the title and then pillage his personal finances.

I could go on and on, but let’s save the rest for a guaranteed later date, for a time when things look especially bleak and the promoters, managers, and media are taking turns raping the sport while smugly congratulating one another for their brilliance. As is usually the case when this happens, I’ll need something to remind me why I’m here fighting the good fight.

You can email Paul at paulmagno@theboxingtribune.com or catch him as he scowls pensively over a notepad while sitting at Starbucks. Paul is a full member of the Burger King Kids’ Club, a born iconoclast, and an ordained minister in the Universal Life Church.