One of my New Year’s resolutions has been to get down to 168 pounds (I currently weigh 180). So far I’ve gotten two different reactions to that, namely “good luck, you should do well if you exercise and eat right” and “168? Why not a round number like 170?” Of course, readers of this website know damn well why I chose a non-round number like 168 pounds, even if I’d still get my ass kicked by Andre Ward.

Of course, if I were using some boxing trainers’ approaches to “making weight”, I could probably make a resolution to get down to 154, starve and dehydrate myself for a week or two, step on a scale looking emaciated and one step short of 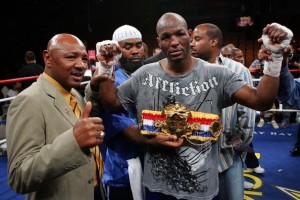 dead, spend the whole next day drinking Gatorade, and call myself the junior middleweight champion of the world while walking around at 180 pounds as soon as the fight was over and I got through with the casino buffet across the street. I call this the Brandon Rios approach to dieting.

Google “struggled to make weight” and you get over 67,000 results, from boxing, MMA, and teenage wrestlers. If a guy who usually walks around as a middleweight in his daily life can artificially wring himself dry and make 135 pounds on the scale, we call him the lightweight champion (or, in the case of Brandon Rios, we call him a guy who lost his title on the scale when the only way he was getting any lighter would’ve been to get the Red Cross or Dracula involved.) Then those same guys take more rounds than they should to get rid of an overmatched opponent because they’re not just fighting the guy in front of them but their own self-imposed weakness.

There was a time when you weighed in on the day of the fight, mere hours before stepping into the ring, nowhere near enough time to properly rehydrate or get food energy into you, and a fighter who fought as a lightweight was rarely bigger than a welterweight outside of his training camps. Supermodels could learn a lot from boxers and MMA fighters when it comes to body image issues. Eventually we’re going to see a guy collapse in the ring, not because of a punch but because of the strain he put on his own body. Memo to boxing commissions: Either move the weigh-in back to the day of the fight or else put rules in place governing how much weight a fighter is allowed to gain back between weigh-in and the opening bell. This insanity has got to stop before someone gets killed in there.

Of course, the crash diet is not the only fraud to be found on the scale in the combat sports. Sugar Ray Leonard was the granddaddy of the “multi-division titlist” swindle, getting sham fights at weights completely apart from his natural fighting weight, including an absurd fight against Donny Lalonde in which Lalonde not only staked his light-heavyweight crown in a fight with a 168-pound limit but even got the criminal-then-as-now WBC to allow the men to fight for the super middleweight title in the same fight just so Sugar Ray—a natural welterweight—could claim some sort of record for holding belts in five weight classes in the same career. Of course, Leonard vacated the light heavyweight crown immediately after the fight since, as a guy who weighed in at 165 for that fight, he would’ve been destroyed by anyone who actually forced him to come up to 175 to defend his title. It was a sham, and drying out Lalonde to eight pounds below his natural fighting weight casts a whole lot of doubt over the super middleweight legitimacy as well. Sugar Ray Leonard was a three-division titlist with two sham belts.

Of course, he looks like a choir boy compared to the Catchweight Champion of the World, Manny Pacquiao. Pacquiao did, of course, have the tremendous advantage of starting his career as a flyweight; gaining 35 pounds from 112 to 147 allows for seven divisions to be conquered along the way while, say, someone my size could start at 154 (my high school weight), gain the same 35 pounds, and only capture five titles along the way (the three flavors of middleweight plus light heavy and cruiser). What makes Pacquiao’s efforts questionable is the twin spectre of performance-enhancing drugs (which I will mention only in tangent here) and the fact that he has never weighed more than 145 in a fight yet claims to have held a world title at junior middleweight (captured from Antonio Margarito and aided and abetted by the WBC despite the bylaws stating that “super welterweight” (the WBC’s term) shall be contested at a weight of no less than 147 nor greater than 154 pounds. Then again, that didn’t stop Sugar Ray Leonard from winning light heavyweight at 165. There is a fine line between travesty and tradition.

This in turn brings up a greater question; what the hell is wrong with being dominant at your natural weight, taking on all comers, and moving up in weight only when age and the clear effects of slowed metabolism and/or greater muscle mass make it impossible to campaign at the weight a fighter campaigned at in his younger days? Consider Carlos Monzon and Bernard Hopkins, two of the three (including Ray Robinson) greatest middleweights ever to lace up the gloves. Monzon held the middleweight title for seven solid years, defending it fourteen times against great men who themselves stayed around 160 pounds their entire careers. Hopkins defended his 160-pound title 20 times between 1995 and 2004, when Jermain Taylor managed in one fell swoop to capture four world title belts (all four major sanctioning bodies, plus the Ring Magazine title if one cares to include it) in what was truly a fight for the ages. When Hopkins fell in defeat a second time, it proved that he was no longer a force at that lighter weight, which makes it all the more remarkable that he reinvented himself at 175 pounds and captured a world title there.

Consider also boxing’s ultimate glamour division; heavyweight. From Louis to Marciano to Ali and Frazier and Tyson and Lewis to the Klitschko brothers, heavyweights have the unique advantage of being able to ply their craft in a static environment; a man over 200 pounds is a man over 200 pounds, after all. If Wladimir Klitschko were a junior lightweight and he ran out of guys to beat up in his own division, he could simply gain five pounds and find a whole new slew of guys to smash, gain another five and become a junior welterweight, and so on until he either got too old or ran out of ability to gain weight without losing power. As a heavyweight, it bolsters his Hall of Fame credentials to say “here is a man who was so great, so dominant, that he literally ran out of men who could possibly hope to challenge him.”

When great fighters choose a weight they’re comfortable with and stay there, the fans benefit. Say what you will about Pacquiao and Mayweather, but the two men’s decisions to compete at 147 pounds and stay there for awhile has made their legacies. If they ever fight, one could be forgiven for suggesting the match may crown a legitimate contender to answer the question of “the greatest welterweight of all time”, the way we speak of Leonard at that weight or Monzon and Hopkins and Sugar Ray Robinson at 160. If Pacquiao wins that fight, who is going to care about the seven other weight classes he campaigned at? Future boxing historians will call him “the great welterweight champion.” Which is, after all, a damn fine legacy and much less subject to the kind of cynicism one expects of self-proclaimed but dubious achievements.

Fox Doucette covers Friday Night Fights for The Boxing Tribune. His weekly column, The Southpaw, appears on Thursdays. He thinks Ray Leonard could beat Pacquiao but not Mayweather at 147. Fan mail, hate mail, and your favorite one-division masters can be sent to beatcap@gmail.com.