On Tuesday, Main Events won the purse bid for the IBF junior welterweight title eliminator between Zab Judah (41-7, 28 KOs) and 24-year-old Vernon Paris (26-0, 15 KOs) and will air the bout as the featured attraction on the March 24th edition of NBC Sports Network’s “Fight Night.”

In his last bout, the 34-year-old Judah lost his IBF 140 lb. title when he was stopped in five rounds by Amir Khan. The veteran from Brooklyn, NY is a three-time junior welterweight world titlist and former 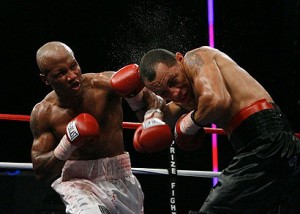 welterweight champion with an 11-7 (9 KOs) record in world title fights.

Paris, recently signed by Don King, had a breakthrough 2011 with wins over Tim Coleman, Emanuel Augustus, and Ruben Galvan and is considered one of the sport’s upcoming stars.

Judah-Paris should be a quality match-up for the NBC Sports Network’s new series. Judah is infamous for inconsistent performances and can, at times, produce some poor showings, but he usually makes for entertaining TV when pressed by an aggressive, hungry opponent. Paris, while not yet proven at the elite level of the division, is a well-regarded fighter known for a crowd-pleasing style.

The debut of the NBC Sports Network “Fight Night” series will be on January 21st when the double header of Eddie Chambers vs. Siarhei Liakhovich and Jesus Soto Karass vs. Gabriel Rosado is broadcast live from Asylum Arena in Philadelphia.