As Kell Brook announces his all-British clash with Matthew Hatton in March, the brash Sheffield puncher serves as a timely reminder of how easy it can be for impressionable, green-around-the-gills youngsters to fall, or be dragged, off the rails.

Brook has had his share of brushes with the law, and with lapses of commitment. In 2010 he was convicted of assault after an altercation in a club (punches were thrown) and popular belief was that a special talent could be withering on the good time vine. Brook’s conviction was overturned on appeal, and in 2011 he had the courage to ditch influential promoter Frank Warren and sign up with Barry Hearn’s Matchroom outfit – so that at 25 years of age, and after a satisfactory American debut, that undoubted talent finally appears to be bearing fruit. 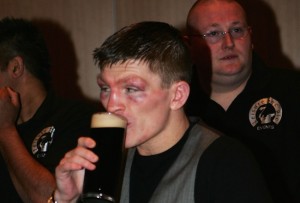 Brook recounts that he was motivated to make the fight after Matthew left him a boozy answerphone message in which the Mancunian, much the worse for wear, threw out various threats and epithets designed to force Brook into a fight. Matthew, remember, is the younger brother of one Ricky Hatton, he who defied the odds and medical opinion for many years by combining a career in the ring with long bouts of debauchery at the bar.

It should be remembered that eventually Ricky’s indiscretions caught up with him, and brought a stellar career to a frustrating halt.

In December, Scotland’s former WBO featherweight champion Scott Harrison was finally re-issued a license to box, having spent the last seven years languishing in a variety of bars, clinics and jails around Europe battling alcoholism and personal problems. Harrison is now 34 years old, and it’s hard to see him regaining anything like his former pomp, which saw him reel off ten world title fights between 2002 and 2005, nine of them victories.

Harrison’s is a cautionary tale that a couple of other British youngsters would do well to learn from. Kevin Mitchell has spent the last twelve months veering between outright brilliance inside the ring and off-duty drunken episodes that have severely compromised his world-title credentials. When Mitchell burst upon the world scene in 2009 by widely out-pointing Amir Khan conqueror Breidis Prescott, he seemed to have the world at his feet. A simple comparison of his and Khan’s progress since speaks volumes – Khan has managed eight victories and seven world title fights since the Prescott loss; Mitchell has boxed three times – one of which was a tune-up, another a debilitating loss to Michael Katsidis, and the third a wonderful performance to stop John Murray. The Murray victory put Mitchell in line for a world title challenge against Brandon Rios, but the Londoner got himself re-acquainted with the bottle yet again, which led to a brush with the law and the withdrawal of his passport, so that John Murray got the shot and Mitchell once again sat on the sidelines, nursing his addiction and a mountain of personal problems.

Mitchell has promised that in 2012 he’s put those issues behind him and is ready to finally exploit his undoubted talent. At 27 years old, the Londoner will need to knuckle down quickly.

He’s not alone. For many, Frankie Gavin has more God-given talent than any fighter in Britain. Gavin was an exceptional amateur, becoming the UK’s only ever World Amateur champion in 2007. He won 100 of 121 unpaid contests and was tipped as a nailed-on Olympic champion in Beijing. Startlingly, Gavin was sent home from the British team’s base in Macau having failed to make weight for the Games.

Gavin turned professional in February 2009 as a light-welterweight and delighted in the nickname “Funtime Frankie”, as if to foreshadow what was to come. He reeled off half-a-dozen wins against journeymen and looked half-decent in doing so, but even at this early stage in his career young Frankie was developing a bigger reputation for fun than he was for fighting. He quickly moved up to welterweight, but had to contend with the common consensus that the weight increase had less to with growth and much more to do with pies. After two lacklustre, but still winning, fights at the end of 2011 Frankie was forced to face up to his commitment issues and moved from his hometown Birmingham, where he admitted a myriad of temptations were too great for him to resist, to London where promoter Frank Warren put him in the charge of trainer Jimmy Tibbs, a notorious task-master who Warren hoped would whip the prodigiously talented youngster into fighting shape.

In October 2011 Warren went ahead and arranged a main event fight for Gavin on national television against stubborn Frenchman Frank Haroch Horta, only for Funtime to disappear back to Birmingham the day before the fight. Warren was apoplectic: “He’s just gone. I heard he went to [former trainer] Anthony Farnell’s house. I’m sick and tired of it. I wouldn’t even talk him into fighting because if I did and something went wrong it would be my fault!” Later, Gavin would cite personal problems for the no-show.

In fact, Warren and Gavin have stuck with it (Warren won’t give up a cash-cow so easily), and the fighter is penciled in for an outing on Nathan Cleverly’s undercard in Cardiff in February. Those of us who have seen Funtime perform at his very best will be keeping fingers and toes crossed that first, he shows up, and second, he finally augments that exceptional talent with a dose of hard work and dedication.