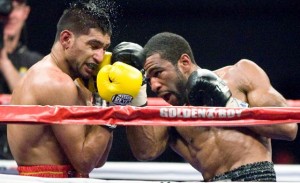 Khan filed numerous protests following the loss, claiming the ringside presence of Mustafa Ameen, who was alleged to have handled the bout scorecards and interfered with bout officials and judges, cast doubt over the integrity of the judges’ scorecards. Another point of contention is the two points deducted from Khan by referee Joseph Cooper, as a result of Khan repeatedly pushing Peterson during the bout.

The WBA cited rule C.26 of its by-laws, and claimed Cooper’s decision to rule a first-round knockdown a slip and the two questionable point deductions are the reasons behind their decision. The WBA also cited possible discrepancies in the scoring between the WBA, IBF, and the District of Columbia Boxing and Wrestling Commission.