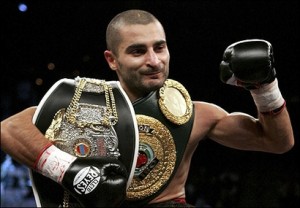 Former flyweight and super flyweight world champion, Vic Darchinyan (37-4-1, 27 KOs) will get another shot at bantamweight gold when he takes on Shinsuke Yamanaka (15-0-2, 11 KOs) of Japan on April 1. No venue has been booked as of today, but the fight will likely take place in Tokyo, ESPN’s Dan Rafael reported.

Darchinyan last fought in December, losing a lopsided unanimous decision victory to WBA bantamweight champion, Anselmo Moreno. Darchinyan has yet to replicate the success he had at the lower weights as a bantamweight, losing in his first outing against Joseph Agbeko in 2009, and to Abner Mares in December 2010. Overall he is 3-3 as a bantamweight, his biggest victory coming against Yonnhy Perez last April, with minor wins coming over club fighters Eric Barcelona and Evans Mbamba.

Yamanaka has never fought outside of Japan and has very little world class experience. His only win of note came last November when he defeated Mexican journeyman Christian Esquivel to win the vacant WBC bantamweight title.