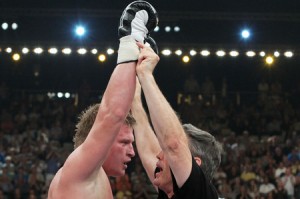 Michael Woods of ESPN.com is reporting that heavyweight Alexander Povetkin (23-0, 16 KOs) and longtime trainer Teddy Atlas are parting ways– at least for his next fight and quite possibly forever.

Povetkin is undefeated but remains relatively untested for a 32-year-old.  He has avoided stepping up to face either Klitschko brother despite numerous opportunities to do so over the past couple of years.

Povetkin is currently ranked 3rd in the world at heavyweight by The Boxing Tribune.

While fight fans have heard Teddy Atlas explain numerous times the reasons he and Team Povetkin did not believe their fighter was “ready” for such a test, enthusiasm for the bout, now that Atlas is potentially out of the way, should be tempered as there have been rumors that the WBA has already named the next opponent for the winner of Povetkin vs. Huck.