Last weekend Cuban boxing star Guillermo Rigondeaux turned his undefeated opponent Rico Ramos into the proverbial deer in the headlights.  El Chacal did a pretty spot-on Floyd Mayweather impression, completely dominating without being forced to take many risks.  A masterful performance like the one we saw from Rigondeaux, now with nine victories in as many professional fights, should by all accounts be met with universal praise.  Of course in boxing, nothing is met with universal praise. 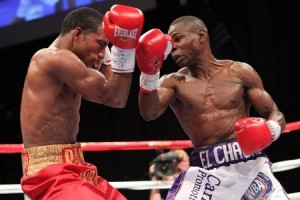 The fight was blasted by fans and media alike as “boring.”  Maybe so, but who’s fault was that?  Ramos felt Rigondeaux’s power when he was knocked down towards the end of the first round, but truth be told the defining moment came even sooner than that.  About a minute into the fight Ramos had the audacity to throw a lead right hand.  Rigondeaux’s lighting bolt counter left beat Ramos’ fist back to his jaw, knocking the over-matched American off balance.  From that moment on the fight quickly descended into a slow, one-sided chess match with Ramos hesitating to make even the most basic offensive maneuver.

Rigondeaux, for his part, was content to dominate the fight on his own terms.  Boos started floating in from the spectators.  Now, if you put down your hard-earned dollars to attend a sporting event, it isn’t unreasonable to assume that you have the right to boo or cheer more or less however you want to.  However it is important to think about who is at fault for your lack of satisfaction.  The standard practice in boxing is too often to blame both fighters when a fight disappoints, but boxing is not a pairs sport.  The competitors are not there to cooperate towards giving you a good experience.  It is a competition between two people, and in the words of former New York Jets coach Herm Edwards, “You play to win the game!”

Think about football as a metaphor for this situation a little further.  If a team winning by 30 points is running out the clock and the lack of competition is making the game boring, is that team obligated to start playing more aggressively for the sake of the fans?  Of course not.  It is the losing team who is responsible for restoring the contest’s competitive balance.  Boxing, like football, is a competitive event.  Your responsibility to the fans is nothing more than to compete and attempt to win.  Rigondeaux fulfilled his part of the bargain.  Ramos, whether due to lack of ability or lack of effort, did not.

Now, the difference between boxing and football when it comes to running out the clock, is that in boxing you cannot ever be 100% sure you are winning.  In Rigondeaux’s fight with Ricardo Cordoba he perhaps assumed too much, and his lack of aggression allowed the fight to be closer than it should have been.  The complaint there though, is not that he wasn’t exciting, but that he wasn’t smart.  When Oscar De La Hoya, assuming he was way ahead, ran from Felix Trinidad the last several rounds of their fight only to be shocked when the judges declared him the loser, he didn’t cheat the fans out of an exciting finish, he cheated himself out of a win.

Now of course comes the part where we hear cries of “Boxing needs exciting fights!”  Fans and members of the media often have a funny way of confusing what they want with what the sport needs.  For all the hardcore fan talk about how Ward-Gatti and other brawls are great for the sport, neither of those fighters were ever crossover stars.  You know who were/are crossover stars?  Jack Johnson, Muhammad Ali, and Floyd Mayweather Jr.  A defensive fighter who is a winner can be every bit as popular as an aggressive one.

In fact, using those three men as examples, one might guess that a fighter’s style outside the ring has more to do with their mainstream appeal than their boxing style.  A guy who is interesting or controversial will outdraw a “blood and guts warrior” type any day of the week.  Rigondeaux can absolutely provide this kind of appeal.  The circumstances of his defection from Cuba are undeniably interesting to anyone with interest in either politics or boxing.  In fact a film chronicling that situation (Brin-Jonathan Butler’s Hero, Traitor, Madness) is already being made.  Rigondeaux has also began to show he can engage in some good, old-fashioned, fight-promoting trash talk, promising to put the world-class fighter Nonito Donaire to sleep if he can lure Donaire into the ring.

Donaire, as I predicted in my previous piece, does not seem so eager.  He cited the “Rigondeaux is boring” excuse this week, even comparing Rigondeaux to his most recent opponent Omar Narvaez, who seemed content to hide behind a high guard and lose every round.  I hate to channel my inner Roger Mayweather, but if you think Rigondeaux is like Narvaez, or that a Donaire-Rigondeaux fight would be anything like the Donaire-Narvaez fight, then “you don’t know shit about boxing.”

Beyond the fact that Rigondeaux is bigger, more athletic, more skilled, and in every way a better prizefighter than Narvaez, the comparison again is equating a defensive winner with a defensive loser.  Rigondeaux has at times ran out the clock in fights he was winning, which when done correctly is a good strategy.  Narvaez was tentative and defensive in a fight he was clearly losing, which is inexcusable.  If you are going to compare anyone in last week’s Shobox main event to Narvaez, it’s Rico Ramos.  The major difference between Rigondeaux-Ramos and Donaire-Narvaez though, is that when Rigondeaux was faced with a reluctant opponent he still got the stoppage.

Now, Donaire is a smart guy who does know quite a bit about boxing, so he is well aware that the comparison was nonsense.  He also surely knows however, that he can play on some fans’ irrational dislike of defensive fighters and get them to actually believe it.

It is up to members of the media and fans to make sure Donaire knows that excuse is not acceptable.  Rigondeaux and he are the two best fighters currently campaigning in the 122 pound division.  With all due respect to Japan’s Toshiaki Nishioka, a fine boxer, he does not provide the kind of challenge to either man that they would present to each other.

Rigondeaux realizes this, and seems confident in his ability to prove his supremacy.  Now it is time to call on Donaire to do the same.