Michael Woods of ESPN and the Boxing Tribune’s own Kelsey McCarson have reported that Teddy Atlas is ending his trainer relationship with Alexander Povetkin, the best heavyweight not named Klitschko. Said Atlas: “Our agreement from the beginning has been that I would go to Russia to train Sasha when Friday Night Fights was off season, and he would come to the United States to train when I was committed to being here for my ESPN duties. That was what we both agreed to, and both sides know it. I have an obligation to ESPN that I have to fulfill, and I intend to fulfill it. Povetkin has an obligation, too, but I’m being told he doesn’t want to come to the U.S. I had expected him to live up to his obligation and am very disappointed in Sasha.” 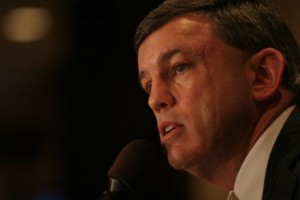 Read that again. A boxing person honored his commitment to his main employer, putting his personal integrity above the chance to train the best hope the heavyweight division has of unseating the two-headed Ivan Drago atop the rankings. I’m willing to bet that Povetkin’s people are not used to being told no and thus fully expected Atlas to say “how high” when asked to jump. Instead, Teddy Atlas stuck to his guns and walked away from the fighter, from the money he’s been getting as a trainer, and from the chance to be the chief second to a champion.

We rip people a new orifice all the time as media people for being weasels, snakes, rats, crooks, liars, finks, and other nouns chosen from our trusty thesaurus when guys like Bob Arum turn what should be the greatest fight in the sport into a never-will-happen farce of hype and bought-off “journalists” printing press releases verbatim or playing the slappy to promoters in a failed attempt to achieve relevance. Boxing “contracts” are so fluid that no big fight should be presumed to actually be happening until the referee says “protect yourselves at all times” and the bell rings to start round one.

To say that promoters, trainers, and occasionally the fighters themselves are “opportunistic” is to grossly understate the point. They’re opportunistic the way a bacterium in an AIDS patient is opportunistic. They’re trustworthy the way a cobra can be trusted not to bite you if you step on it. They’re loyal to the fans the way Marcus Junius Brutus was loyal to Julius Caesar. If there is a way to enrich themselves, the overwhelming majority of boxing people would sell their mother into slavery rather than honor their obligations in a way that suggests a sense of duty, loyalty, and professionalism.

And yet here’s Teddy Atlas, a guy who, with his professional reputation and track record, could call his own shots and get ESPN to say “we’ll get Andre Ward or Sergio Mora or BJ Flores or Bernard Hopkins to keep the seat warm for you” (the way they did when Povetkin pulled this same crap last August, and nobody’s said anything about what happened between Atlas and the Worldwide Leader apart from there being some goodwill there the first time; anything I could say here would be pure speculation, and there’s more than enough of that in the blogosphere already without me to spew my own made-up-on-the-spot news about the matter). He could go to Russia, train his fighter, give Povetkin a big hug after he disposed of Marco Huck, and when the March 3rd edition of FNF came on the air, go on as if nothing happened.

But Teddy Atlas didn’t do that. He kept his word to ESPN, to his legion of fans (your friendly neighborhood commentator included), to his craft as a broadcaster. Really, who else in boxing can look themselves in the mirror and say that? My hat is off to you, Teddy. Well done.

In other news, I stuck my neck out Tuesday in my FNF preview saying it will be a must-see event. Now, I’ve been beaten like a piñata in the comments section from time to time as a blowhard who doesn’t know what he’s talking about (mostly by Pacland mouth-breathers whenever I don’t sufficiently fellate their favorite fighter–like my belief that Mayweather will knock Pacquiao out in five rounds by walking him into a counter-punch was somehow paid for by Floyd himself, in semen if the more frothy imbeciles are to be believed.)

I’ll cop to being wrong once in awhile. I called Lamont Peterson vs. Victor Cayo “must-see TV”; the fight was serviceable, reasonably entertaining, but hardly “throw a fight party” Micky Ward-quality action. I predicted Manny Pacquiao would knock Juan Manuel Marquez out on account of the latter’s giving up too much size and strength to the bigger man; on my card at least Marquez won that fight. In a run of either bad luck or profound lack of foresight I once lost almost $600 by losing eleven consecutive bets on boxing matches in the Reno sports books back in 2003-04.

But every once in awhile I am so confident in my assessment of an impending situation that I feel pretty comfortable putting a bit of my credibility on the line. I’ll say it again. If you aren’t watching ESPN this Friday night, you run the very real risk of missing out on, not one, but two fights that remind us all why we love this sport so much. If Ruslan Provodnikov and Ji-Hoon Kim can’t make action fights that are TV friendly, we might as well just stop televising the sport entirely because nobody will ever entertain us.

And besides, there’s a man of integrity from whom you can learn more than you ever wanted to know about the Sweet Science in the analyst’s chair. See how this all comes full circle?

Fox Doucette covers Friday Night Fights for The Boxing Tribune. His weekly column, The Southpaw, appears on Thursdays. Fan mail, hate mail, and anything you know about futures, options, and other financial derivatives that threaten to kick your columnist’s ass in Finance 410 this semester can be sent to beatcap@gmail.com.