Quigg has been groomed for stardom since turning pro back in 2007. Despite a short-lived 12 fight amateur career, the 23-year-old Mancunian has always looked the part–racing to a 23-fight unbeaten run in the paid ranks, with 16 inside distance wins. He shouldered the British title in his last fight four months ago when he dismantled former world title challenger Jason Booth, forcing the veteran to pull out after seven lop-sided rounds. 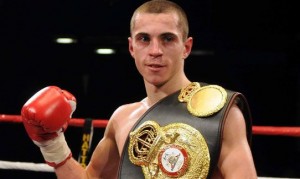 Quigg will be looking to reply to arch-nemesis Carl Frampton, who had a sound win last weekend, by looking good against the capable, but light-punching Arthur. Arthur had had a couple of tilts at a British title, one of them up at featherweight, but had been found wanting on both occasions. Despite being a professional for nearly 10 years, the Welshman has only managed 23 fights, and he’s lost five of those.

That said, Jamie has a reputation for durability, and he generally goes the distance.  He may be able to mess Quigg around for a few rounds and make matters difficult, but young Quigg has all the tools and could very well see Arthur off in the later rounds.

On the undercard, Britain’s Rendall Munroe will be looking to get himself into a fight with Quigg at some point in the future when he entertains Argentine journeyman Jose Saez. Munroe, 23-2, 9 KO’s, has been marking time since a gallant but futile assault on Toshiaki Nishioka’s WBC title back in 2010, when he traveled all the way to Tokyo only to be outworked by the champion over twelve rounds. Munroe has had a couple of meaningless wins since, but wants to step things up in the super-bantam division, which is pretty hot at the present time with the likes of Donaire, Rigondeaux and Nishioka dominating.

On face value Munroe should breeze through on Saturday night. Saez is a veteran at 36, and his record is sketchy–21-12, 11 KO’s. He’s boxed six draws too. He managed to win a WBC interim title of some sort in 2008 and shared a ring with former IBF champion Steve Molitor a year later, but he doesn’t travel well. He’s boxed four times outside his native Argentina and lost each time. Expect him to maintain this run on Saturday, although he’ll probably have enough Argentinian grit to take the light-punching Englishman the ten round distance.