photo and story by Kelsey McCarson

SAN ANTONIO — As they piled into the Alamo Dome Saturday night, fight fans were greeted with the usual assortment of t-shirts and promotional trinkets to purchase.  Lines were stacked with anxious and eager buyers of keepsakes to remember they were there. 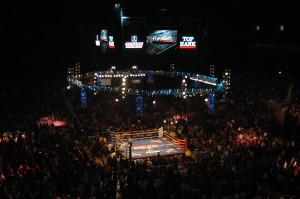 Hanging on the rack, with bold Mexican green and red typeface, was one such item prominently displayed.  It was a white t-shirt adorned with the classic Nike swoosh symbol.  It read: Julio Knows.

Surely, WBC middleweight titlist Julio Cesar Chavez Jr. is not up to the level of ardor for dominance that Bo Jackson was all those years ago when the two-sport phenom’s Nike-sponsored ad campaign rang out all over the land.

Julio Cesar Chavez Jr. doesn’t know all the things Bo Jackson knew back then, but none of the people standing in line to purchase those shirts were wondering about that. They only wanted to see if Julio knew how to fight.

And that he did.

After a first round that saw each fighter feeling the other out, the bout established itself into a consistent flow. Chavez stalked his opponent with his hands held high, always coming forward and ever the aggressor.  He’d dig to the body with hooks and uppercuts and force his opponent backwards, attempting to impose his strength on Rubio with quick powerful shots.

But Rubio was ready.

Pacing like an animal in between rounds before coming to the center of the ring with renewed vigor at every sound of the bell, Rubio fought with both aggression and skill.  Instead of playing the matador to his rival’s bull, Rubio would lean in as he maneuvered around his hard charging adversary to land quick but solid blows wherever and whenever he could.

The fight continued that way until round 5 when Rubio seemed to stun Chavez with a good body shot that forced Jr. up on his toes to box for the first time in the fight until he could make his way back to the safe recovery of his corner.

Round 6 saw Chavez again coming forward.  No matter the fists flying back at him, he’d thrust himself onward towards Rubio.

By round 9 it appeared that Chavez  had lost a bit of his steam.  He looked gassed but continued to fight in the same style.  Now, though, he was getting hit more often.

Rubio seemed to be getting stronger as the fight wore on.

There was a moment in the tenth where it appeared a question arose.  Maybe it never crossed the fighter’s mind, but fight fans had to wonder if this would be the moment Chavez decided he wasn’t a real fighter after all.

But Julio Cesar Chavez Jr. is a real fighter.

Rounds 10-12 were rough and raucous. The action worked its way into a crescendo until the final bell sounded.  Both fighters had their hands raised. Perhaps they both really believed they won, or maybe they just knew they had put on a good fight.

No matter, by the end of the fight a couple things were clear. Julio Cesar Chavez Jr. had won a close but clear decision against a solid, veteran tough guy that only guys who know how to fight can beat.

And Julio knows how to fight.

The co-feature of the evening showcased junior featherweights Nonito “The Filipino Flash” Donaire and Wilfredo Vazquez Jr.  From the very beginning of the contest, it appeared that fight fans who predicted a blowout win for Donaire had good reason to be confident.

Donaire looked faster, quicker and stronger than Vazquez from the opening bell.  As such, Donaire was the more aggressive fighter through the early rounds using heavy-handed potshots to establish himself.  Vazquez kept his guard high but couldn’t seem to tee off on his more agile opponent.

Round 3 saw Donaire doing his best Roy Jones Jr. impression, as he held his hands down low in a showboating stance, before working Vazquez into position to land a thunderous uppercut that shook the fighter.  Vazquez went into self-preservation mode while Donaire pummeled him into the corner.  Just before it appeared the contest might be halted, Vazquez was able to uncork a straight cross to get Donaire off of him long enough to escape the onslaught.

Moments later, Vazquez wildly flailed at Donaire only to slip down to the ground.  He made it back up but looked shaky through the rest of the round.

Round 4 was perhaps Donaire’s best round.  He looked impressive and it appeared he would finish the contest whenever he decided, yet by round 5 it seemed he had lost his momentum.  From then on, Vazquez was able to jab and land enough right crosses to make the rest of the contest much more interesting.

Vazquez saw the canvas in round 9 when Donaire unleashed a lethal uppercut to stun him, followed by a sharp left hook. Vazquez managed to get back to his feet.

The championship rounds saw back and forth action.  Vazquez proved to be a spirited competitor, but Donaire was just too fast and too strong, despite what appeared after the fight to be a bloody and possible broken hand.

Nonito Donaire (28-1, 18 KOs) took home a semi-bogus split-decision win.  Two judges had the fight 117-110 while Ruben Garcia somehow scored it 115-112 for Vazquez.  While it’s conceivable the fight was much closer than 117-110, it is ridiculous to score it for Wilfredo Vazquez Jr. (21-2-1, 18 KOs) no matter how valiantly he fought.  He was simply outclassed and the decision should have been unanimous.

There were two notable happenings during the untelevised portion of the card.  First, Vanes Martirosyan (32-0, 19 KOs) stayed undefeated with a 3rd round TKO victory over Troy Lowry.  Lowry came to the ring in an AC/DC shirt with the song “TNT” blaring loudly, but quickly found out the only person having any such thing as “TNT” in their gloves was Martirosyan, who should now seek bigger and better fights in the 154lb division.

Meanwhile, welterweight prospect Alex Saucedo (2-0, 2 KOs) scored a tremendous first round knockout over his opponent, Jean Colon (0-2, 0 KOs), with a sensational left hook which was surely the punch of the evening.  Expect big things from Saucedo.