Matthysse comes out of Argentina and is ranked 11th in the world among junior welterweights.  Since 2010, he’s lost two out of 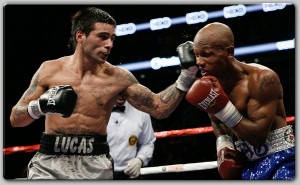 six bouts, both losses coming by split decision.  The first loss came on November 6, 2010 against Zab Judah, with two judges scoring the bout 113-114 in favor of Judah and the third scoring it 114-113 in favor of Matthysse.  The second came on June 25, 2011 when he faced Devon Alexander in a ten-round bout.  He has wins over Vivian Harris (TKO 4) and DeMarcus Corley (TKO 8).

Martinez is a late replacement for Matthysse.  Silverio Ortiz was originally scheduled, but suffered a cut during training and withdrew from the bout.  Then, journeyman, Ivan Valle stepped in, but also was forced to withdraw. Martinez, a native of Empalme, Sonora, Mexico, has mostly fought at the Mexican club level against marginal opposition, with the exception of a TKO 3 loss to  fringe contender, Ricardo Dominguez last July.

Seven other bouts are featured on the card and it is reported that action will begin at 8pm EST with coverage on Latin Sports DirecTV.