Anyone who has ever laced up a pair of boxing gloves and joined the paid ranks has dreamed of becoming a world champion. As competitive as we are by nature, it is only natural to want to be the best at what we do. Holly “Lil Bear” Lawson (1-1) is no different. Still relatively new to the sport, Lawson has been boxing since her mid-twenties and only became a professional in 2010. Originally from Canada, Lawson now calls Los Angeles her home, and the famous Wild Card Boxing Club, the home of stars like Manny Pacquiao and Amir Khan, is her second home. Early in her career she has built a 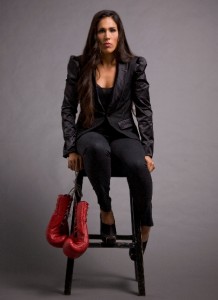 sizable local following, and she hopes to grow her fan base as she embarks on her journey.

Lawson’s journey has only just begun, however, and in her short career she has seen her share of peaks and valleys. Lawson lost her professional debut in October of 2010, a fight in which she says she learned a lot, despite the heartbreak of a loss. She would go on to win her second fight, which took place last April.

Instead of building any momentum and moving forward in her career, she had fights fall apart throughout the remainder of the year.

“I had another fight lined up in June. It was a local promoter, and about a month before the fight he ended up moving the date to August…or to July. And then he moved it again to August,” Lawson said during our recent conversation.

Eventually the entire card fell apart and it was canceled. Her biggest letdown came last October, when she was scheduled to travel to Texas to fight on the undercard of Roberto Garcia’s homecoming in McAllen, Texas, but the entire card was canceled just four days before it was set to take place.

“He [Garcia] was the main event and he trains with my trainer, Eric Brown. We were both going to fight on the same card; we were both training for the date. The week of the fight comes around and I couldn’t get ahold of the promoter. Wednesday we were going to leave for Texas, and on Tuesday I was told they canceled the whole card.”

Understandably, she was upset at the fallout and concerned with the effect so many training camps would have on her body.

“Overtraining was a concern to me last year. I actually took a week off and didn’t really do anything. Then over the Christmas holidays I maintained, but I didn’t kill myself in the gym,” she explained. “When I found out I was going to be fighting in January is when I started sparring with [WBA female super featherweight champion] Kina Malpartida.”

Never one to be held down by the setbacks in her past, Lawson prepared for her January 27 fight date as if it was set in stone. After Bridgett Ruiz (0-1) was named as her opponent, the fight was moved back to February 10.

“It was last minute, but I’ve been in the gym training and I was ready to go on January 27,” she said. “I couldn’t find a lot of information on her, but I know she lost her first fight, she lost every round, and she fought at 140. We’re meeting at a catchweight, so I assume she’s small. I’m not going to assume anything beyond that. I don’t try to take anything for granted. I just go into everything thinking she’s been in the gym as much as I have, she’s sparring as much as I am, and she’s as tough as I am.”

Friday night hopes to be merely a first step on the way to a world title for Lawson. After starting out her career on her own, she recently signed with a manager, one Irit Avrahami. “He’s not a boxing guy. He comes from a business background, and he’s a fan of boxing and a fan of mine, and he’s somebody who kind of sees my vision of what I want to do,” Lawson said of Avrahami. “I think he sees bigger than my vision. I have my vision and his vision might even be bigger than that, which is a really nice place to be.”

Holly’s goals are simple: To become a world champion. She doesn’t expect super-stardom. Along with becoming a world champion she wants to build herself as a genuine brand.

“I want to make sure that I’m doing what I can to make things better for women–young girls in particular–for the future, be it in boxing or not,” she proclaimed.

“Everything that I do I always take into consideration that at some point I’m–I’d like to be looked at as a role model. I’d like for young women to look at me and be like, ‘you know I can do something that’s outside of the norm. I can step outside the box and I can pursue something in athletics. And in order to do that I don’t have to sell myself out sexually, I don’t have to dumb myself down, and I don’t have to sleep with anybody to get anywhere’,” she stated. “What I can do is work really, really hard, be good at my craft and believe in myself.”

Lawson believes that self confidence is one of the more important characteristics in a role model, especially for young women in athletics. She sees it as being absent in the publicizing of female athletics, and one of her goals is to be a model of self confidence while she strives to bring more attention to her sport.

“I think we don’t have enough of that. There are thousands of amazing women who do incredible things every day, and they don’t always get the publicity or the shine that their male counterparts do. When you take that into consideration in the realm of athletics, boxing or not, it’s the same thing and it’s a very magnified view of that.”

With only two professional fights under her belt, she knows she won’t be an ambassador for the furthering of women in sports by week’s end. Lawson believes that she has a duty to her sport and to all those that choose to follow in her footsteps, to improve the landscape in women’s boxing.

“I guess I’m really stubborn. I don’t think that just because something is one way it has to be that way. I think it’s everybody’s job and everybody’s duty who chooses to pursue something, to do what they can to make that thing better. So if you really love boxing, and you really love women’s boxing, and you’ve been into women’s boxing for a long time, or you’re trying to get into a sport that’s really difficult to get into, then it’s not okay to say ‘I’ll do this and have that old man who gives me money and just do whatever, or just sit back and take what people give me, and I’m going to fall into the stereotype of what people will have of what I need to look like, and say, and how to act.’ I think that it’s your job, as a person in general, to try to change things however you can.”

Holly Lawson sees every side of the prism. She has observed the female boxers, like some of the men in boxing, who are only out for themselves. At the same time she has seen those of both genders, who are looking to do more and have found the middle ground between shameless self-promotion and the tireless efforts to bring boxing–for both men and women–back into the mainstream.

“There has to be some outlet and some way to take control of our own destiny and put ourselves out there in a way that encourages other people and uplifts other people and validates you and what you’re about,” Lawson opined.

What is most important to Holly Lawson in the end, is being seen as an equal in the sport of boxing.

“What is really important to me is for people to not say they want to see this women’s boxing match,” Lawson said. “I want them to say, ‘you know, she’s a boxer, and I want to watch boxing because there’s this girl that I want to watch’, and it’s because my skill is of that level, or because I bring that level of entertainment. I know there are other people out there; I know it’s not just me. You have to be able to break the mold.”

Opportunities in women’s boxing are limited. And Lawson is aware of the “dog-eat-dog” mentality among the sport’s competitors. She knows that if she is to rise to the top of her sport, she, as well as the generation to follow, will be better served to stand as a united front.

“As women we’re sort of taught to go after each other and go after this one little spot that’s left for us. For me to get ahead I don’t have to push aside other female boxers. But if you’re in my weight class I’m going to push you aside,” she said with a laugh. “But if you weigh 120 pounds I’m never going to fight you, so I want to make sure that I’m bringing you up with me, because the more that I can bring up with me the stronger I am.”

Lawson wants to break the mold as she marches along to a world title. The mold of the “sloppy girl brawler” was cast long ago. As a new generation of skilled and dedicated women take to the squared circle, they’ll need more than a yeoman’s approach to learning the intricacies of boxing to break that mold.

“I don’t want to be told I have to look a certain way, or behave a certain way in order to be good at the sport,” she said. “I want to be how I am, and look how I look, and speak how I speak and have people respect me as an athlete, as a boxer, and as a person.”

Change, Lawson believes, will only come for those who accept that the status quo is in need of changing. Holly offered one last statement in regards to her thoughts on changing the state of women’s boxing. She knows, however, that her words are only words, and she must first take care of business on Friday night to make her dream a reality.

“I think with anything in life–if you take athletics out of it–you can’t change something if you’re willing to accept it. You have to be willing to say ‘I’m not going to accept that this is how this is.’”