Arce and Parra fought once before, battling to a draw in a 2010 WBO junior featherweight eliminator in Culiacan, Sinaloa, Mexico. In that contest, a one point deduction in round seven against Parra turned out to be the difference between the 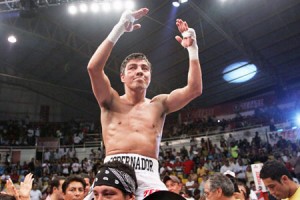 draw and a split decision victory in hostile territory for the veteran.

Since then, Parra, 33, was stopped in eight rounds by WBA bantamweight world champ, Anselmo Moreno in June of 2011.

The 32-year-old Arce, on the other hand, has experienced a career revival, going 4-0 since the Parra draw with a WBO junior featherweight title upset over Wilfredo Vazquez Jr. and a win over Angky Angkota to capture the vacant WBO bantamweight title topping Arce’s list of recent accomplishments.

A rumored Summer bout between Nonito Donaire and Arce, however, has been ruled out for the time being due to scheduling conflicts.

On the undercard, 24-year-old Jorge Paez Jr. (30-4-1, 18 KOs), fresh from his victory over fellow Mexican second-generation welterweight prospect, Omar Chavez, returns to the ring to take on Mexican club fighter, Octavio Castro (14-7-1, 9 KOs) in a scheduled ten round bout.