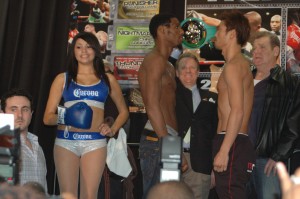 Paul Williams (40-2, 27 KOs) was all smiles as he took to the scales.  After milling around with fight fans, posing for photos and taking some time to chat it up with some pretty happy kids, Williams weighed in a pound and a half under the contracted 155 lb weight limit at 153.5 officially. 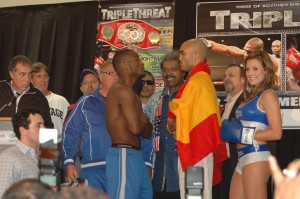 Probably the most avoided man in the light heavyweight division, Tavoris Cloud (23-0, 19 KOs) sat patiently with friends and family until it was his turn to step up to the podium.  Cloud made the kinds of faces at his opponent you’d expect from someone who fights the way he does; he let Gabriel Campillo (21-3-1, 8 KOs) know he was going to come after him as soon as the bell rang.

Cloud made the light heavyweight limit at 175 while Campillo weighed in at 173.5. 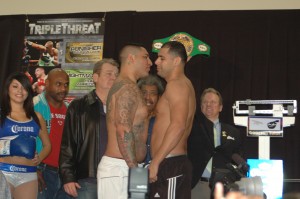 Heavyweights don’t have a contracted weight limit, but that didn’t keep the big boys from stepping up to the scales as a matter of ceremony.

Indeed, the loudest roar during the event was heard when the heavyweights stepped up on stage.  Former title challenger Chris Arreola (34-2, 29 KOs) jawed with his opponent, unheralded Texan Eric Molina (18-1, 14 KOs), until the crowd started screaming at them to fight.  The two fighters were then separated.

Arreola-Molina will broadcast live on Showtime Extreme at 8PM EST.  Later that night, Cloud-Campillo and Williams-Ishida will air live on Showtime at 10PM EST.  Follow @BoxingBTBC for live updates from Press Row.