In the lead-up to his getting his ass kicked by a guy with a busted shoulder last week, Dereck Chisora complained that the 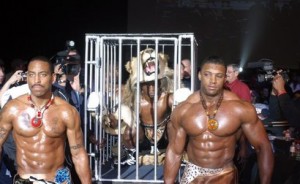 Klitschko media empire wanted him to walk to the ring with “some Euro trash music like ‘The Final Countdown’” as his entrance music. While it is true that nobody does (or ever has done) the ring entrance quite like professional wrestling–repeat after me, “I am a real American, fight for the rights of every man”–there have been more than a few boxers to make a challenge for pro wrestling’s crown.

With Sharif Bogere fighting again this weekend, your columnist was reminded of the first time I saw the wacky Ugandan enter a ring for a four-round swing bout on Friday Night Fights back in August of 2009. Bogere entered the ring with a lion pelt draped over him, hauled to the squared circle by a team of porters, the fighter himself locked in a cage like an animal. It is impossible to see such a sight without bursting into peals of childlike laughter, which may explain, as well as anything, how Bogere was able to knock out Rodolfo Armenta in two rounds. Just beating the ten count after rolling on the floor laughing would be a test of even a great champion’s heart.

Still, Sharif Bogere did not invent the ring walk WTF moment. Google “crazy boxing ring walk” and marvel at the sheer volume of lists, paeans, “what mental institution did they let that guy out of?” moments, and other fertile research ground. If my research has taught me anything, it’s that there is a right way and a wrong way to do each of the major types of ring walk.

To be fair to Bogere, he’s got the aesthetic right on what he’s trying to accomplish. Porters carrying a lion cage with a dude ludicrously dressed in an animal skin may be comically absurd, but the effect–”I am a madman, do not think I’m a soft touch”–works for Sharif’s style. With 13 knockouts in 21 pro fights, including a third-round KO of a 16-0 prospect (Francisco Contreras) in his first real test in his last fight, “The Lion” has real, proven power. A few more knockouts like that last fight and what was once humorous will quickly become a powerful form of intimidation for any below the stout-hearted.

Contrast that with Prince Naseem Hamed, whose “magic carpet ride” ring walk before his fight with Vuyani Bungu needed only an in-character Robin Williams playing a genie to cinch the title of “cartoonish” once and for all. After Micky Ward and Shea Neary had just put on a display of grit, toughness, and flat-out badass in the co-feature, Hamed’s hey-look-at-me absurdity ought to have had any self-respecting fight fan rooting for the Prince to get his inflated head knocked off his shoulders. Not that Vuyani Bungu was in any position to do so–he may have been an above-average junior featherweight, but Hamed added “stronger man” and “faster man” to “crazier man” to complete the triple threat on that night in London.

Music and theatrics do not always a ring walk make, however. Need an example? Try Mike Tyson, back when he was still the Baddest Man On The Planet, walking to the ring in 1988 for what would become one of boxing’s all-time great “opponent voided his bowels before the bell rang to start round one” moments. With all that deadweight removed from fear, Michael Spinks fell in ninety-one seconds. Tyson entered to a music beat that can only be described as “guttural”, wearing no robe or hood, fists up as if he were held back only by divine intervention from beating the holy hell out of not only his opponent but the Atlantic City crowd, the commissioners, Michael Buffer, and anyone else stupid enough to stand where Iron Mike could see them. Even Spinks himself had a look to suggest that the description earlier offered was only incrementally exaggerated from the honest truth.

Not to pick on Hamed again, but his Halloween night entrance against Wayne McCullough in 1998 drew derision from Ian Darke for being in poor taste and derision from sensible boxing fans for the Prince’s absurd dancing to Michael Jackson’s “Thriller” in Atlantic City. McCullough had a look on his face like “is this supposed to psych me out?” The reaction was the anti-Spinks. The fight itself was anti-climactic (like all too many of Hamed’s fights during his title run), a unanimous decision that was never in question for the champion, but the ring walk was essentially Prince Naseem Hamed wasting four minutes of everyone’s time for benefit of his own ego. Leave the death imagery to Bernard Hopkins, Prince. There was a guy who knew how to frighten the urine from enemy bladders. Hamed managed to fail at both humor and intimidation…although that may have been his greatest gift; his opponents, thoroughly amused, may very well have lost their killer instincts out of the sheer farce of it all.

As for Chisora’s complaint, there is but a single response. Don’t lose to guys with one good arm and you can call your own shots as the most marketable fighter in Europe. Just a suggestion.

Fox Doucette covers Friday Night Fights for The Boxing Tribune. His weekly column, The Southpaw, appears on Thursdays. He can’t hear Dave Bickler singing “Eye of the Tiger” without thinking of those Bud Light Real Men of Genius ads. Fan mail, hate mail, and the chorus of “you suck” from Hamed’s fans can be sent to beatcap@gmail.com.