It’s become cool to lament the state of the heavyweight division these days. Since a lot of fight fans out there can’t seem to get excited about the marauding Klitschko brothers, who rule the division with an iron fist, here are the top five heavyweight prospects that could someday dethrone them. 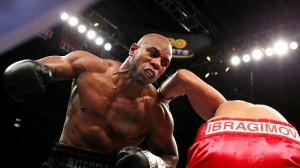 1. Seth Mitchell Jr. (24-0, 18 KOs) – For those looking far and wide for America’s best shot at a legit heavyweight contender, look no further than Mitchell. The former collegiate linebacker is big, strong and has serious pop in both hands. Mitchell was an All-American linebacker at Michigan State University before knee injuries ended his career. The Spartan’s loss has been boxing’s gain. He dominated Timur Ibragimov in his last outing which is exactly the kind of thing a future heavyweight champion should do. Next up, he’ll face fellow American, Chazz Witherspoon, in what should be his toughest test to date.

2. David Price (12-0, 10 KOs) – After an impressive amateur career which culminated in sharing the 2008 Olympic bronze medal at super heavyweight with American prospect Deontay Wilder, Price turned professional and immediately has become a big name in the UK boxing scene. Price has real power and stands 6’8” tall. He looked impressive in his first round knockout of notable John McDermott and stands on the verge of fighting for the BBBofC British heavyweight crown versus Sam Sexton.

3. Deontay Wilder (21-0, 21 KOs) – Despite his 21 straight knockouts, America’s lone medalist in the 2008 Olympics remains somewhat an enigma. He’s got real power but doesn’t seem to work behind the kind of jab a 6’7” fighter should. More importantly, his undefeated record has come against anything but the cream of the crop. Put lightly, he’s been fed a steady diet of stiffs and has-beens. Wilder’s management has said this is all by design, so hopefully that part of their plan will be over soon. Fight fans on both side of the pond could easily envision a Price vs. Wilder heavyweight trilogy to bring heavyweight boxing back to the forefront.

4. Tyson Fury (17-0, 12 KOs) – At age 23, Fury is the youngest fighter on this list and has done the most in the sport so far. Fury has fought the toughest challengers and has carried the now vacated BBBofC British heavyweight crown. He fights like fans want guys to fight despite his lengthy 6’9” frame, and he gets hit just as much as he hits. Fury seems to have vacated his British title in order avoid Price, but it probably makes sense to let that fight build as both of the undefeated fighters draw well over in the UK. A few more wins by each and the fight would be a blockbuster.

5. Denis Boystov (30-0, 25 KOs) – Let’s face it, eastern European heavyweights have flat-out been kicking the rest of the world’s butts in the heavyweight division for some time now. If that is to continue without the Klitschkos, it may very well be Boystov that carries the mantle. Boystov’s career was momentarily halted by injury for 10 months, but he’s rebounded with three knockout wins in a row. Boystov might not move the needle for American fight fans, but the 26-year-old fights out of Germany where heavyweight boxing is alive and well.

Other notables: Malik Scott, Mike Perez, George Foreman III and Kubrat Pulev are also undefeated prospects who could make some noise in the division.