Moses, 28-2, 19 KOs, who is a Namibian police officer by day but a former world champion in his own right, came to fight and gave Burns the kind of test he needed to set up a summer British blockbuster with Englishman Kevin Mitchell, a fight that promises to fire up fight fans in the UK. 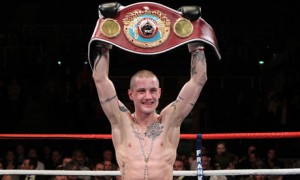 Burns, now 34-2, 9 KOs, has suggested he wants to get through a hundred professional fights before hanging up his gloves, such is his love for the sport, but he’ll not realise that ambition if he has too many distance fights where he is made to work as hard as this.

He controlled the action generally, and was always first to the punch, even if Moses was able to get home on a handful of occasions with a rakish right hand. It was Burns’ jab that was his most effective weapon, complemented by some left right combos. In this contest, Burns’ footwork and control of distance was truly world class. Moses was often confused and made to look disorganised by the Scotsman’s superior work and it has to be questioned whether the former WBA champion will compete again at this level. The judges scored the contest 120-110, 119-110, and 117-111, which seemed a fairish reflection of the action. This scribe had it 119-109 and was only able to find one round (the sixth) for the visitor.

Afterwards, Burns was effusive in his praise for the Namibian, and looked forward to that mouth-watering clash with Londoner Mitchell: “He could punch – he caught me with a few. That was a tough, tough fight. I’m ready to fight anyone at all – I’ll fight anyone they put me in with, but I’ll do my talking in the ring.”