Paulus Moses (31-2, 20 KO’s) vs. Leonardo Gonzalez (21-4-1, 14 KO’s) – Namibia Moses is a former WBA world lightweight champion, but hasn’t held a world title in a number of years. He last lost to Ricky Burns in 2012 but has won three bouts since, picking up the WBO International lightweight title along the way. His last bout was a fourth round stoppage over Mzonke Fana in … END_OF_DOCUMENT_TOKEN_TO_BE_REPLACED 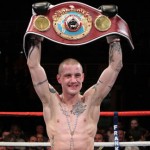 by Geoff Poundes Tonight at Glasgow’s Braehead Arena, hometown hero Ricky Burns confirmed his new-found status as the WBO’s lightweight champion proper when he comprehensively outboxed legitimate challenger, Paulus Moses, over twelve rounds. Moses, 28-2, 19 KOs, who is a Namibian police officer by day but a former world champion in his own right, came to fight and gave … END_OF_DOCUMENT_TOKEN_TO_BE_REPLACED 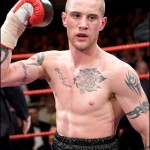 One of Scotland’s finest ever, Ricky Burns, appears to have failed to agree terms for his all-British outing with Englishman Anthony Crolla in March, and has instead drafted in Namibian Paulus Moses for the March 10th clash at the Brae head Arena in Glasgow, Scotland. Burns, 33-2, 9 KO’s, is still marketing himself as a world champion, having given up legitimate WBO … END_OF_DOCUMENT_TOKEN_TO_BE_REPLACED 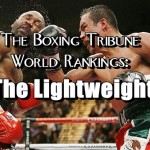 As detailed earlier, The Boxing Tribune World Rankings offer a fair and accurate look at each of boxing's seventeen weight classes. Using a unique formulaic criteria based on activity and level of opposition within a fighter's own division, The Boxing Tribune stands firmly behind it's world rankings and hopes that others will use them as a standard of fairness in the … END_OF_DOCUMENT_TOKEN_TO_BE_REPLACED

by Dafs117Somebody check the temperature, this division is getting hot. Lightweight is one of the few divisions that have an obvious champion in Juan Manuel Marquez, when he defeated Juan Diaz in The Boxing Tribune’s Fight of the Year by ninth round knockout. Marquez is head and shoulders above the rest in talent, but that doesn’t limit his options at the weight class. His … END_OF_DOCUMENT_TOKEN_TO_BE_REPLACED