One of Scotland’s finest ever, Ricky Burns, appears to have failed to agree terms for his all-British outing with Englishman Anthony Crolla in March, and has instead drafted in Namibian Paulus Moses for the March 10th clash at the Brae head Arena in Glasgow, Scotland.

Burns, 33-2, 9 KO’s, is still marketing himself as a world champion, having given up legitimate WBO 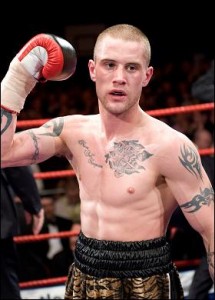 Thirty-three year old Moses is a former world champion in his own right, having taken the WBA title from Yusuki Kobore by decision back in 2009. Moses, 28-1, 19 KO’s defended that title once before coming unstuck against Miguel Acosta in May 2010, surrendering his title by 6th round stoppage. The Namibian has reeled off three victories since, against limited opposition, but remains a live opponent for Burns.

The Scotsman, however, is on a phenomenal run since his last loss in 2007 to Carl Johanneson when he passed over his British super-featherweight title and appeared to have found his level. Burns has gone 18-0 since that setback, including an out-of-this world performance to rip the WBO super-featherweight title from highly touted Roman Martinez in March 2010. Three defences later, Burns found he’d outgrown the division and made the fight with Katsidis up at lightweight.

Whilst Moses boasts a very decent record, he’ll be boxing in front of a rabid Scottish crowd and his forays outside his native Namibia and South Africa have been few and far between. Burns has the form and the home advantage and whilst he’s often felt to be a light puncher he looked strong and powerful at 135 pounds against Katsidis, so that I can see him putting paid to Moses inside distance.