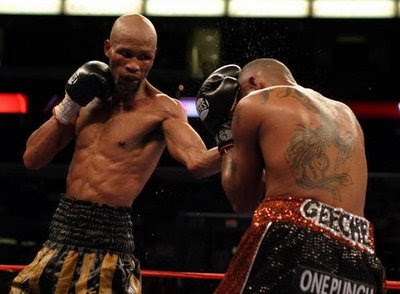 Somebody check the temperature, this division is getting hot.

Lightweight is one of the few divisions that have an obvious champion in Juan Manuel Marquez, when he defeated Juan Diaz in The Boxing Tribune’s Fight of the Year by ninth round knockout. Marquez is head and shoulders above the rest in talent, but that doesn’t limit his options at the weight class.

His next opponent is Michael Katsidis, an Australian warrior that drags every fighter into war. Katsidis sort of broke America, stopping Jesus Chavez and outpointing Vicente Escobedo on the Mayweather-Marquez undercard. Has another shot to capture the 135 pound crown, after being stopped by Joel Casamyor, who has since moved up in weight, in the tenth round of their war.

Juan Diaz has returned following his very short departure up in weight, as he had two contests with Paulie Malignaggi at catchweight, going 1-1 with the Magic Man. ‘Baby Bull’ will stage his comeback at lightweight, but it could be a difficult road back to the top of the rankings.

Behind Juan Manuel Marquez is Edwin Valero, a power punching beast that can’t get a license in the States. The Venezuelan is a beast, a monster in the ring, and his wild style will always make for exciting viewing. A fight with Katsidis would be outstanding, the sheer volume of power being thrown would be immense. Some doubt his whiskers, but they are untested at lightweight.

South African Ali Funeka has endured a tough year, but has still emerged as a leading contender for Marquez’s crown. Funeka gave it his all against Nate Campbell earlier in the year in what was a gripping fight, and then was robbed against Joan Guzman in one of Funeka’s best performances to date. He could be a titlist by February.

Guzman has shown signs of decline, which is a real shame as the Dominican hasn’t quite lived up to his potential. He’s an outstanding boxer, but people question his desire and hunger for success in the sport. They have a right too, he’s been very unprofessional over the last two years and has been inactive. Guzman’s stock keeps dropping, and he needs to turn it around, quickly.

Rolando Reyes emerged as a wildcard following his demolition of Julio Diaz inside five rounds on the ‘Lightweight Lightning’ card. Reyes hasn’t fought since, but will have an opportunity to fight for the vacant IBF strap in February, against Ali Funeka. It’s difficult to judge if he really does belong with the names of the division, as Diaz was well past his prime, but time will tell.

After moving up in weight, I thought Humberto Soto deserved to be in contention for a top 10 spot. He’s been matched well so far, winning his second fight at the weight against Jesus Chavez in a very entertaining, if one-sided battle at the end of the year. Has another step up in class against David Diaz, a chance to Soto to show what he has to offer at the weight.

In a year full of upsets to Golden Boy fighters, Miguel Acosta emerged triumphant against Urbano Antillon with a ninth round knockout victory. Acosta is another aggressive fighter to add to the already lively bunch, and he will produce fireworks against whoever in the ring. Will anyone take a chance on Acosta?

WBA titleholder and Namibia’s second titleholder ever, Paulus Moses, is an undefeated unknown that has emerged from Africa. He upset the odds in Japan against Yusuke Korobi, and is expected to hold onto the title for a little while longer before doing something drastic.

David Diaz got back to winning ways with a ten round majority decision victory over Jesus Chavez. Antonio DeMarco has kept on winning and will challenge Edwin Valero for the WBC crown in February. He claims it’s personal. Anthony Peterson, Brandon Rios and John Murray are still unbeaten, and are inline for big things in 2010. Murray is expected to challenge for the European title against France’s Anthony Mezzache. Breidis Prescott is much ado about nothing. The Colombian bomber lost to Miguel Vasquez, before being outclassed by Kevin Mitchell, who has moved up from junior lightweight and is immediately thrown into the WBO mixer. Marco Antonio Barrera is still alive, not sure if he’s still kicking though. Alex Arthur lost, no sympathy felt there. Charismatic Willie Limond is making the most out of his Khan performance, fighting for the coveted WBU title. Way to go, Willie.

An outsider for division of the year next year, especially if Marquez keeps active and Valero and Katsidis keep on slugging it out. My prediction for 2010 is that the division will leave a mark on the year, positive or negative we’ll have to wait and see.

Summary: His year began with a bang as he landed the perfect uppercut on Juan Diaz’s beard in a battle that looked even at that point. Earned his biggest payday, and well deserved may I just add, against Floyd Mayweather Jr., which he lost a shutout unanimous decision to in the process.

Summary: Valero has risen to second spot by battering previously ranked Antonio Pitalua in two painful rounds and fighting nobodies. But the decline of Juan Diaz and the fact that Michael Katsidis lost to Diaz accumulates to his second spot. Should cruise past DeMarco in February.

Summary: The giant South African had a breakthrough year, despite not winning a fight. Funeka gave everything against Nate Campbell live on HBO, narrowly losing a majority decision in a gutsy effort from both fighters. He was later robbed in Quebec against Joan Guzman for the vacant IBF title, which remains vacant until February 20.

Summary: Diaz needs to realise that his best days are at 135 or lower, definitely not higher. Lost a thrilling battle with lightweight king Juan Manuel Marquez in The Boxing Tribube’s Fight of the Year, and went 1-1 with Paulie Malignaggi in bouts he was expected to win. He is unsure about his future, as he is looking to take a career in law.

Summary: Pound-4-Pound the most exciting fighter on the planet, Katsidis manages to turn everything into a war, and a competitive one no matter who he fights against. Should have earned a unanimous nod against Escobedo in another great fight. Needs to be razor sharp if he wants to dethrone Juan Manuel Marquez in May.

Summary: A poor man’s Floyd Mayweather Jr., Guzman has struggled since he outclassed Humberto Soto in 2007, struggling to make weight and dealing with age. Is known for his amazing reflexes, which are slowing down as time passes by. Guzman needs to keep busy, but don’t expect him to, as he’s used to fighting once a year.

Summary: Reyes demolished a shot Julio Diaz in five rounds early in the year, but failed to capitalize on the victory not fighting throughout the year. Challenges Ali Funeka for the vacant IBF strap on February 20, which should be a decent affair.

Summary: He’s yet to vacate his WBC super featherweight title, but I’m sure he’s moving up in weight. Building his resume at 135 against named fighters, Soto could face Edwin Valero in a bloodbath in Mexico this year, with Valero failing to get a visa and Soto drawing a crowd in his home country.

Summary: Smashed heavily backed prospect Urbano Antillon in a make or break fight for Acosta, and an upset of the year contender. Acosta was rumoured to be facing Soto or Valero next, but nothing has come together yet. Doubts over his chin, but another Venezuelan bomber at the 135 pound scene.

Summary: The undefeated Namibian shocked the Japanese public with a victory over hometown fighter Kobori in January. He went on to defend against Shimada in a one-sided affair where Moses only lost a round. He’s 31, so he’s not the youngest, and if he wants to achieve something that the world will take note of, he might need to do it quickly. He could face Marco Antonio Barrera next.