Coliseo Roberto Clemente, San Juan, Puerto Rico– In a war that could easily produce Fight of the Year and Round of the Year honors, Mexico’s Orlando Salido (38-11-2, 26 KOs) stopped Juan Manuel Lopez (31-2, 28 KOs) in the tenth round to successfully defend the belt he took from Lopez last year. 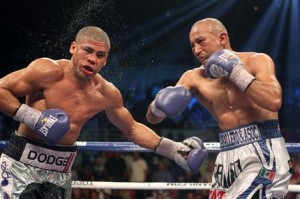 Coming into Lopez’s home country for the second time, WBO featherweight titlist, Salido put the pressure on the former champ, coming forward while swinging heavy right hands. Lopez fought well in retreat, displaying better overall defense than in their first encounter and making a conscious effort to keep his left hand high and close to the chin to defend against Salido’s right hand.

After four evenly-fought rounds, a perfectly timed right hand from Lopez sent a hard-charging Salido to the canvas at the end of the fifth. After the knockdown, Lopez abandoned some of his movement, squared up, and fought the type of offensive fight that has made him a fan favorite at home and abroad.

But Salido, with swelling under both eyes, refused to give an inch and continued applying pressure to the Boricua bomber.

After a thrilling back and forth ninth round, that will be categorized as the early favorite for Round of the Year, a spent Lopez came out for the tenth and walked into a bone-rattling, four-punch series that wobbled and dropped the former world titlist.

Lopez would beat the count, but was clearly out on his feet and in no condition to continue. Referee, Roberto Ramirez Sr. would officially wave off the bout at the thirty-two second mark of the tenth round.

On the undercard and in stark contrast to the war staged in the main event , Miguel Angel “Mikey” Garcia (28-0, 24 KOs) delivered a steady, disciplined performance en route to a seventh round technical knockout over former world title challenger, Bernabe Concepcion (29-6-1, 25 KOs).

Winning every round going into the sixth, Garcia would put on the pressure and eventually force the referee to stop the fight in the seventh after scoring a knockdown and then battering a buzzed Concepcion against the ropes.

Garcia may now be in line for a world title shot against WBO champ, Orlando Salido.