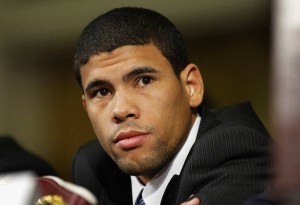 Following his loss, a battered Lopez told Showtime’s Jim Gray that referee, Roberto Ramirez Sr., was a known gambler and a questionable official. Given two chances to clarify his statement, Lopez would only reaffirm his accusations.

Valcarcel did, however, leave some room for pulling the suspension, allowing five days for Lopez to give cause to rescind the punishment.