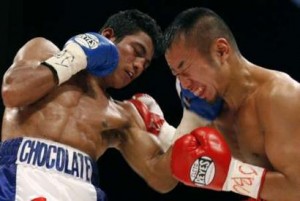 The 24-year-old Gonzalez, a native of Managua, Nicaragua, is scheduled to defend his title in April against Ramon Garcia Hirales, but will be taking this Saturday’s Jimenez bout as a tune-up. A former strawweight titlist, Gonzalez won the interim WBA junior flyweight title by stopping Francisco Rosas in two rounds. He would be promoted to full champ status in early 2011 when Giovani Segura officially vacated the title. Since then, Gonzalez has made three successful defenses of his belt.

Jimenez, a native of Mexicali, Baja California, Mexico, has no major names on his resume, but has scored solid regional-level victories over the likes of Luis Carrillo and Yader Escobar. However, Jimenez is 0-2 in his last two contests.