Sergio “Maravilla” Martinez (48-2-2, 27 KOs) defends his lineal middleweight title against Matthew “Mack the Knife” Macklin (28-3, 17 KOs) on Saturday, March 17 at 10 PM EST/7 PM PST on HBO World Championship Boxing. This twelve-round fight headlines a night of fights in celebration of St. Patrick’s Day in New York and will be held at The Theater at Madison Square Garden. 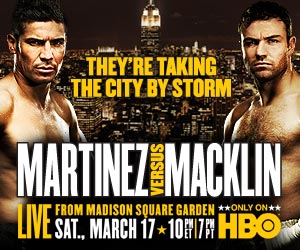 In his last fight, Macklin traveled to Germany to challenge for Felix Sturm’s WBA middleweight title. Macklin outworked, outlanded, and outscored the long time WBA titlist in the eyes of many. He did not, however, outwork, outland, and outscore Sturm on two of the most important scorecards: those of the ringside judges. Levi Martinez saw the fight 115-113 in favor of Macklin, and judges Roberto Ramirez Sr. and Jose Ignacio Martinez each turned in scores of 116-112 in favor of Sturm.

While Macklin fell short in his first bid for world gold, he gets a shot at the lineal middleweight champion on Saturday night.

Sergio Martinez, of Quilmes, Buenos Aires in Argentina, is quite possibly the most avoided fighter in his division. Martinez is the middleweight champion without a belt, and the money and fan base he brings does not stack up against the risk he poses, and as such, the other middleweight belt holders are more likely to stay within the safe confines of WBC, WBA, WBO, and IBF-approved challengers.

Martinez, 37, has enjoyed success late in a career that began late. After ill-fated attempts at soccer and cycling stardom he turned to boxing, and after only two years in training he turned to the professional ranks. He spent the early portion of his career fighting in Argentina before moving to Spain, with a stoppage loss to Antonio Margarito in Las Vegas in 2000. Martinez became a minor HBO mainstay in 2008 when he stopped Alex Bunema.

In his next fight he wound up the victim of a bogus majority draw with Kermit Cintron. The fight would not have gone to the scorecards had Frank Santore Jr. not been talked into reversing a seventh-round knockout.

Martinez, however, impressed in his fight against Cintron. His unorthodox style and athleticism creates the kind of crowd-pleasing excitement so rarely seen as a result of defensive maneuvers.  He got the call to move up to the middleweight division and be the late replacement for the injured Kelly Pavlik in December of 2009. Martinez showed that he was not only a flash and dash boxer from the outside, but that he could mix it up inside with Williams, known for throwing in the neighborhood of 100 punches per round. He and Williams traded first round knockdowns, and spent a good part of twelve rounds playing tug-of-war with a fickle momentum.

Once again Martinez was involved in a controversial decision, this time he was announced the loser. If not for the curious 119-110 scorecard turned in by Pierre Benoist, the word “robbery” might not have been so liberally used to label the outcome of that exciting matchup.

It was not all for naught, as Martinez got the call to be then-middleweight kingpin Kelly Pavlik’s dance partner for his April 2010 comeback. Martinez, a natural jr. middleweight at the time, figured to be a safe option for the returning slugger from Youngstown. Martinez proved to be too much, and walked away from a bloody and demoralized Pavlik with three middleweight titles.

Now, after a stunning one-punch-knockout victory over Paul Williams in the rematch of their thrilling 2009 affair, a surgical dissection of Serhiy Dzinziruk last March and a pedestrian TKO victory over Darren Barker last October, Martinez returns to remind everyone why he deserves to be called one of the sport’s best.

In his last fight, against Barker, Martinez found he was unable to so deftly maneuver himself away from Barker’s crisp punches, and he ate a lot more leather than he had been accustomed to. He’s a guy who naturally fights with his hands low while he lures his opponent in. Even while stalking his opponent, as shown against Dzinziruk last March, he waits for openings created by his lackadaisical approach to defense to stun his opponents.

What Martinez, rated number one at middleweight, does best, is what southpaws are taught not to do. He moves quickly to his left, into the power of a right hander, and walks his opponents into his lead left hand. Since the beginning of his exploits on HBO, Martinez has sacrificed the straightness of his lead left hand for a more powerful, looping overhand left that he’ll turn over as he moves away to his right (and away from a right hander’s power).

Macklin, rated number 7, is not a devastating puncher, nor does he have the speed that one would need to consistently catch the slippery Martinez with his hands down. From the outside Macklin makes excellent use of mixing his attack to the head and body. He has shown a proclivity for throwing a left hook off a double jab. And when he gets inside, Macklin does not go away from a varied attack, and mixes in some very good body work with his attack upstairs.

What Macklin lacks, in addition to natural speed, is head movement. He has shown enough upper body movement that helped him get inside and bully Felix Sturm last year, and he’ll need more of that against Martinez on Saturday night.

For Macklin to have any success Saturday night, he’ll need to ignore his natural instinct to follow Martinez into his well-placed traps. Like Darren Barker did last October, Macklin will have to sit behind a tight defense and time his offense to start when Martinez is still in range with his hands down.

And if Martinez finds himself in a similar situation as the Barker fight, he should look to stay patient and not push for the knockout. Macklin doesn’t hide behind a high guard often, but when he does Martinez should look to use the wide right hook when on offense and wait for Macklin to come out.

In the end it is difficult to see Macklin duplicating the success he had against Sturm. Simply stated, Martinez is not as slow as Sturm, and what he lacks in technical discipline, he more than makes up for with his athletic gifts. I see Macklin having his moments early on, but as the fight wears on Martinez will pick him apart from the outside and eventually walk him into enough lead left hands that he’ll take on the role of the aggressor, stalking and hurting Macklin to force a late stoppage.