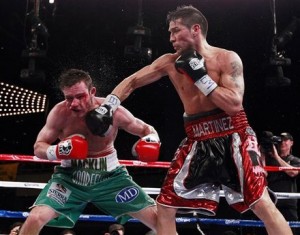 Macklin fought well for most of the contest, maintaining a draw over the first eight rounds and proving himself as a worthy challenger to the division’s top fighter. The UK-import even managed to score a questionable knockdown over Martinez in the seventh round that, after further review, was definitely more of a trip than legit knockdown.

Martinez fought at his usual pace and in his usual style, with his hands at his sides and working off rhythm and timing. It took some work from Martinez to time his challenger, who was smartly coming forward and keeping Martinez in a defensive posture for much of the early bout.

But Martinez would eventually find his timing and Macklin would begin to tire. By the ninth round, Martinez had obviously found his rhythm and by the tenth, Macklin’s legs were going.

The eleventh round was all Martinez as he landed solidly against a tough challenger who no longer had the energy to offer up much resistance. Macklin would be sent to the canvas twice in the last thirty seconds of the round, prompting trainer, Buddy McGirt to wave off the contest between rounds.

Rodriguez, ranked 18th in the 168 lb division by The Boxing Tribune, was simply too good for an earnest, but overmatched George. Out-slugged and out-boxed, George would put up a solid effort in defeat to a fighter who is likely two or three fights away from a championship bout.