Juan Manuel Marquez and Brandon Rios, both dealing with last minute substitutes, will co-headline a split-site pay per view on April 14th. 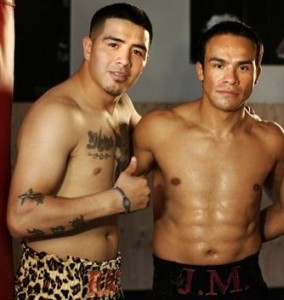 Marquez (53-6-1, 39 KOs), who will be fighting in Mexico City, will take on the Ukraine’s Serhiy Fedchenko (30-1, 13 KOs) for a hastily created WBO interim junior welterweight title.

Fedchenko, whose career high-water marks are wins over a faded DeMarcus Corley in 2010 and fringe French contender, Willy Blain, in 2011, is the current European junior welterweight champ.

Marquez was originally scheduled to face light-hitting Argentine, Cesar Cuenca, but had Fedchenko step in as a replacement for unspecified reasons.

Abril, a Cuban fighting out of Miami, Florida, is a replacement for Yuriorkis Gamboa, who pulled his name from consideration over a contractual disagreement. Abril’s biggest win to date happened in his last fight when he scored a twelve-round unanimous decision over Miguel Acosta. His two other high-profile bouts were split decision losses to Henry Lundy and Breidis Prescott.

Filipino lightweight/junior welterweight prospect, Mercito Gesta (24-0-1, 12 KOs) is also tentatively scheduled to be part of the show against an opponent to be named.