This Saturday at Reliant Arena in Houston, Texas, two fighters will be battling for redemption and two will be fighting to establish themselves as main stage attractions in a fan favorite twin bill broadcast on HBO. 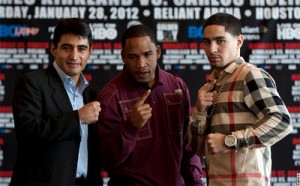 Morales was essentially handed the WBC belt on a silver platter after a scheduled Morales-Lucas Matthysse bout for the vacant title fell apart and the unproven Pablo Cesar Cano was allowed to step in for Matthysse. The 22-year-old Cano, suffering two badly swollen eyes, would lose the contest via corner stoppage following the tenth round.

In this coming contest, Morales faces another young challenger in Garcia, but one who is significantly more talented and experienced than Cano.

Garcia is coming off a split decision victory over Kendall Holt in his last bout. Prior to that, the Philadelphia native counts victories over Nate Campbell, Mike Arnaoutis, and Ashley Theophane as his most impressive wins.

In the co-headlining bout, James Kirkland (30-1, 27 KOs) seeks to extend his major career comeback with a win over crude, but supremely tough, Carlos Molina (19-4-2, 6 KOs) in a guaranteed action fight.

Kirkland, coming off a thrilling sixth round TKO of Alfredo Angulo last November, is in full redemption mode after a prison sentence for a parole violation derailed his career for two years and a first round TKO against light-hitting Nobuhiro Ishida stopped any career momentum he had following his release.

Since the TKO loss to Ishida, Kirkland is 3-0 with 3 knockouts. Victories over club fighters, Dennis Sharpe and Alexis Hloros meant little in this run, but the Angulo win served to immediately revive his career momentum. A win over Molina will likely garner Kirkland a world title bout by 2013.

Molina, who has made a career of scoring upsets, has established himself as one of the toughest, most underrated fighters in the sport. In recent contests, he has scored upset victories over Kermit Cintron and Danny Perez as well as a controversial draw with Erislandy Lara that could easily have been scored in favor of Molina. The 28-year-old has also scored solid victories over Allen Conyers, Ed Paredes, and Alexis Camacho.